After a loss of form after Virat Kohli scored his maiden-double ton against West Indies, he has finally got back into run making spree. Kohli recorded his second-double ton in the first innings of the third and final Test against New Zealand at Holkar Stadium, Indore. Kohli completed his 200 in 347 balls with 18 fours and no sixes. Kohli secured his first century on Day 1 of the Indore Test since his double ton against West Indies in the first Test at Antigua. Since then, he did not even get to 50-run mark. Kohli looked good for a fifty but got out at 45 at Calcutta Test. Kohli completed his hundred off the fifth ball of 85th over. This is also the first hundred by any batsman in this series so far. Live cricket scorecard: India vs New Zealand, 3rd Test

Earlier, a warm Sunday morning, and the crowd at Indore s Holkar Stadium was on its feet to cheer Rahane s class. Meanwhile, New Zealand tried to feed on Rahane s weakness of playing short-pitched delivery. Ajinkya Rahane was in his 90s. Before this, he fell prey to nervous 90s twice: 96 against South Africa and 98 vs Bangladesh. The only batsman to have scored hundred this series is Kohli. However, Rahane was on the verge of becoming the second one. This is the first time a duo stitched up a 200-plus partnership since West Indies series.

At the time of publishing his report India were446 for 3 with Kohli not-out on 200* & Rahane not-out on 159* runs respectively. 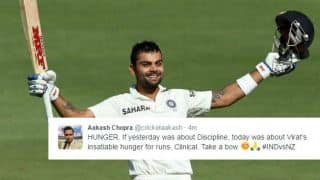