India had completed a historic series whitewash of New Zealand by winning the three-Test series handsomely and the last match within four days.

India‘s senior off spinner, Harbhajan Singh, criticised the kind of surfaces India has played on in the last four years in home conditions. Harbhajan used the hash tag ‘tailor-made conditions for spinners’ while referring to the Indore surface. He went on to say his and Anil Kumble’s wickets tally would have been “something else” if they had bowled more on such turfs conducive for spinners. Virat Kohli was taken aback by Harbhajan’s comments after India had completed a historic series whitewash of New Zealand by winning the three-Test series handsomely and the last match within four days. FULL CRICKET SCORECARD: India vs New Zealand, 3rd Test

According to Cricinfo, Kohli did not seem very impressed with this jibe from his senior player. He replied, “See even if it is a turning pitch you have to bowl well. There is no spin doesn’t happen only off the pitch. Spin is about how many revs you impart off the shoulder first. And then the ball will do something off the pitch. I quite clearly remember after we lost to New Zealand in the ICC World Twenty20 (WT20I), suddenly their spinners were quality and we were found out. I don’t see anyone talking about that now. The same spinners have played. Why have they not been able to pick wickets? It is as simple as that. Our fast bowlers picked wickets everywhere. We never complained about anything. So see you can give a guy a cement track to bat on. He [still] needs to have the mindset to score runs. It is as simple as that.”

Earlier when asked about complete team performances on three different tracks and how much confidence that gives India for a mouth watering five-Test series lying ahead of the team against England, Kohli stated, “Well, we knew before the series that people are going to start talking about pitches. But we made it a point that we…we knew that there are monsoons everywhere, wickets are not going to be as dry. Especially in Kolkata, we knew that it wouldn’t be dry; it was a newly laid wicket. We didn’t say anything once. We believe in our abilities, we should be good enough to do it on any surface and against any team.

Kohli concluded by saying, “That is a step in the right direction as far as our team is concerned. We believe in our skill much more, and not focus on creating atmosphere or conditions that might suit us partially. We just wanted to express ourselves the way we can on a cricket field. We finished two games in four days on perfectly fine Test cricket pitches. That gives us a lot of confidence.” 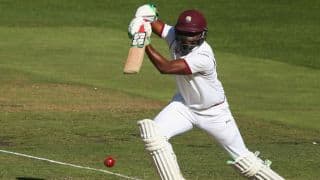