Virat Kohli's sensational hundred puts India in the driver's seat on Day 1 of the 3rd Test against New Zealand, at Indore's Holkar Stadium.

The chants of ‘Gambhir, Gambhir’ echoed Indore’s Holkar Stadium, as the southpaw came to open the batting with Murali Vijay. The last time he donned India’s jersey was two years ago, in England. He did not back down though. He made amendments in his technique. He piled on runs at domestic level. In short, he left no stone unturned to earn readmission in Team India. Shikhar Dhawan, who was injured KL Rahul’s replacement in the second Test, was ruled out due to minor fracture. With that, India captain Virat Kohli gave his fellow Delhiite a nod. Live cricket scorecard: India vs New Zealand, 3rd Test

My colleague Chinmay Jawalekar, who was enjoying his weekend at the venue, said the roaring Indore crowd was excited about stadium’s debut in the longest format. As a matter of fact, the attendance read 80 per cent. This evidences the fact that the people in two-tier cities such as Indore are still in synchronisation with the longest format. To put things into perspective, spectators at the iconic Eden Gardens did not show enough exuberance even when the local boy Wriddhiman Saha was in the thick of things. Indore, on the other hand, was chanting ‘Sachin, Sachin’ along with ‘Sehwag, Sehwag’ throughout the day. Some passion, they displayed for Test cricket.

All the same, Gautam Gambhir was at his swishiest best. Standing parallel to cover point, his change in technique helped him churn out 29 runs. It was not a usual Gambhir-like innings. It was a characteristic one, nonetheless. He counterattacked every plan dished out by Kane Williamson, especially the short-bowling tactic. Gambhir smashed two back-to-back sixes: one over square-leg and the other past deep fine-leg. Then a crisp cut and lovely leg-glance took us down memory lane. His innings was studded with 3 fours and 2 sixes. He, as a matter of fact, looked good for a big score. Also read: Virat Kohli capable of leading ODI team well: Harbhajan Singh

Given the cracks on the wicket, Williamson introduced spinners into the attack, after 4 overs. It paid off, as Jeetan Patel dismissed Murali Vijay on 10.

Cheteshwar Pujara, along with Gambhir, added 34 runs for the second wicket, before the latter was trapped in front by Trent Boult. To put things into perspective, it was Williamson’s sheer brilliance that put his team in driver’s seat.

As both Pujara and Gambhir scored boundaries at will against spinners, Williamson counterattacked with pace from both ends. There was no boundary for 6 overs then, resulting in a crucial wicket. The scorecard read 60 for 2.

As a matter of fact, this was the seventh consecutive time Kohli won the toss. And in home conditions, Indian captains usually decide to bat first. Kohli, going for the domination, chose the same.

When the star batsman took the crease, the crowd roared in happiness, something that reminded us of the great Sachin Tendulkar and something that will never leave our memory (let’s not get carried away, you know). Also read: SC rejects plea asking to overrule ban imposed on CSK

No half-century since his double-century against West Indies. Not that it’s a failure, but a lot is expected from a player of his class.

As always, he opened his account with a beautiful cover-drive a Kohli special. He took few more deliveries to get his eye in. The next boundary came off his 41st ball: another drive past mid-off. He followed a Test-like approach this time. He was in no hurry to churn out runs. However, the sailing was not smooth for the India captain. He was being beaten often. But that did not stop Kohli. He did what he does the best: laugh in the face of adversity.

Kohli pounced on everything that was bowled short. He pulled Matt Henry to vacant deep mid-wicket region. Meanwhile, New Zealand kept bowling in the corridor of uncertainty.

An edge flew past the slips. Kohli fetched another boundary, nonetheless. He reached 48. He was 2 runs away from breaking the jinx. And he does that in style, as he eased a half-volley to extra-cover. He celebrated his 13th Test fifty by raising his bat, acknowledging the crowd. To remind you, Kohli’s conversion rate is outrageous. Before reaching the 50-run mark, he had as many fifties as hundreds.

New Zealand pacers rocked him with ferocious bouncers. They even induced a couple of top-edges. Eventually, a short forward-leg and leg-spin were stationed. There were few aaahs and oohs. But Rahane was time and again lucky to have survived the short ball. In the end, India did not mind, as the scoreboard kept ticking.

Rahane kept playing his strokes despite being bogged down by remarkable bowling. He gradually reached 49, and brought up his 10th Test fifty with a colossal six over deep mid-wicket. The partnership had then surpassed 100, a much-needed impetus.

Kohli, slowly and steadily, reached his hundred. With that, he has now more hundreds (13) than fifties (12). In short, it was another day and another ‘Virat Kohli’ special.

It was Kohl’s first hundred in 3 years, at home. Quite baffling, isn’t it? But that’s Kohli for you. He has a knack of taking everyone aback with his superlative performance. In addition, he becomes the first batsman to score a century in this series.

Along with Rahane, he added 167 runs for the fourth wicket. 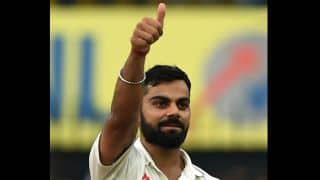