Indian team showed how children behave when parents are away: Twitter trolls lash out at Rohit Sharma and

On a winning streak, having already sealed the five-match series 3-0, India got a harsh reality check after losing by eight wickets in the fourth ODI against New Zealand at Seddon Park, Hamilton on Thursday. (India vs New Zealand, 4th ODI: FULL SCORECARD)

The tourists seemed clueless in the absence of Virat Kohli, who has been rested for the remaining two ODIs and the following three-match Twenty20 Internationals as Trent Boult s fiery five-wicket haul destroyed the Indian batting line-up halting the visitors’ domination. (ALSO READ: New Zealand consign India to biggest ODI loss in terms of balls remaining)

The Indian team’s much-vaunted batting was dismissed for its seventh-lowest ODI total 92 in 30.5 overs after Boult (five for 21) dished out a lethal opening spell. Colin de Grandhomme made use of the swinging conditions to good effect and pocketed three wickets in his 10 overs at 2.60.

India, led by Rohit Sharma, became the butt of all jokes on Twitter following their embarrassing defeat with just one match to go on February 3. We ve picked out some of the best. 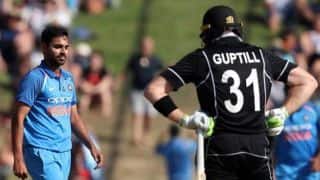