New Zealand after winning the toss, elected to bat first which was proved to be good as Guptill and Latham added quick runs.

New Zealand openers Martin Guptill and Tom Latham for the first time in the One-Day International (ODI) series looked to be in complete control. Guptill in particular was aggressive against the medium pace of Dhaval Kulkarni. Guptill hit Kulkarni for three-boundaries in the same over. It was the second over of the day with 16 runs coming of the over. Latham soon came into this own, striking two boundaries in the very next Kulkarni over. At the time of publishing New Zealand were 42 for 0 with Guptill on 28 and Latham on 12 not-out respectively. LIVE CRICKET SCORECARD: India vs New Zealand, 4th ODI at Ranchi

Kane Williamson led New Zealand have finally won the toss and have elected to bat first. India have made one chance as Dhaval Kulkarni has come in for Jasprit Bumrah, with New Zealand making 3 changes. New Zealand have drafted in Ish Sodhi, Anton Devcich and BJ Watling in their playing XI . India are currently leading the series 2-1 after winning the third ODI at Mohali. India had drew first blow winning the first ODI at Dharamsala, with New Zealand making a comeback at Delhi leveling the series 1-1. The fifth and final ODI will be played at Visakhapatnam.

At a venue where India have won all their matches, two in ODIs and one in T20I, Dhoni has had limited opportunity as the India s most successful captain and best keeper batsman s top-score here is 10 not out. 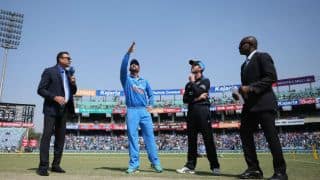