New Zealand‘s dream to win their maiden bilateral ODI series on Indian soil remains unconquered, for MS Dhoni and. co hammer them by 190 runs in the fifth and final ODI at Dr. Y.S. Rajasekhara Reddy ACA-VDCA Cricket Stadium, Visakhapatnam. All the same, the goddamn Virat Kohli yet again exhibited his genius batsmanship despite the track being slow. All in all, he churned out 358 runs at 119.33, with a strike rate of 100.84 this series. If truth be told, it was just another series and another Virat Kohli special. At this rate, the star batsman will break records one can’t even think of. Full Cricket Scorecard, India vs New Zealand, 5th ODI

Amidst all this, we witnessed the Indian team boasting of their mother’s name on their jerseys. “We are quite used to having the surnames from the Dad’s side, and what’s important is to appreciate the stuff that Mothers have done for us. It’s a very emotional connect and it’s good that it is put on a public platform. I would like to request the whole of India keeps this in mind every day and appreciate them everyday,” Dhoni said at the toss. Since the conclusion of the Test series, we have been seeing Dhoni, Kohli and Ajinkya Rahane running the campaign for Star Sports.

However, opener Rohit Sharma finally emulated his brilliance. He took the bull by its horns and bludgeoned 65-ball 70, inclusive of 5 fours and 3 sixes. Along with Kohli, he added 79 runs for the second wicket, putting India in a commanding position.

Then began the Dhoni-Kohli show, the much-awaited extravaganza of every contest. The duo stitched up a 71-run stand and kept the scoreboard ticking. Though Captain Cool took his time to find his feet, he later smashed 4 fours and a swaggering six over the long-off boundary.

Just when India were in the driver’s seat, Mitchell Santner trapped Dhoni in front and sent the Indian captain on 41. Nonetheless, his deputy Kohli continued what he does the best: go all guns blazing.

The swaggering batsman scored his 39th half-century at the age of 27. Now here are his overall figures: in 176 ODIs he represented for India, he has scored 7,570 runs at 52.94. In addition, he has already equalled Sachin Tendulkar’s record of most hundreds in winning causes.

Kohli, while trying to scale up the run-rate in the death overs, he holed out a tossed-up delivery to wide long-on. However, it was the 46-run stand between Akshar Patel and Kedar Jadhav that took India to 269 for 7.

As a result, chasing 270 was not that tough a task. The track, however, was slower than it was dished out. It had no grass, no purchase, no juice. For that matter, even the Indian batting unit had a tough time scoring runs at will.

“Improving is the main thing and we have done that in the ODIs after the Tests. Tough to read surfaces here,” Williamson said at the toss.

Umesh Yadav started off the proceedings with a bang, for he cleaned up Martin Guptill New Zealand’s only ODI double-centurion with an absolute jaffa. He pitched the ball on middle, swung it away, squared Guptill up and uprooted his off-stump.

The onus, yet again, was on the Latham-Williamson duo. As a matter of fact, the pair has been putting their heart and soul to take their fallible team out of the woods.

But all they could do was add 28 runs for the second wicket, as Jasprit Bumrah produced a leading edge and sent Latham back to the pavilion.

In came the experienced Taylor. By then, pressure was already mounted on them. All the same, they had the cool and calm Williamson at the crease. But he fell prey to the pressure of chasing as well, for he played a rash shot, driving straight in the hands of Jadhav at long-off similarly the way Kohli got out. The scorecard read 3 for 63 after 14.4 overs.

From there, it was a downhill, so much so that they were bundled out for 79 after 23.1 overs.

And the credit goes to Amit Mishra, as the stunning leg-spinner picked his third five-wicket haul, including two spectacular clean-bowled of Watling and Neesham

Moreover, Mishra was awarded Man of the Series for scalping 15 wickets at 14.33. “It is great for the team if I perform. They have supported me during tough phases. At the start, I was a little tense, but Dhoni told me to calm down, bowl at the wickets, and thanks to that, all went well. Anil Kumble also talked to me about it before the match, to trust my strength, to trust the flighted balls,” Mishra said after the match.

Man of the Series: Amit Mishra 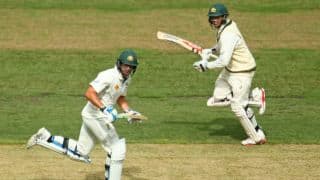