Ross Taylor and Kane Williamson consolidate their partnership to torment India in the fifth One-Day International at Wellington on Friday. Both the batsmen completed their fifties. Williamson has scored a half-century in all the five matches of the series. New Zealand are 149 for two in 31 overs.

It was a deja vu for Kiwis who are cruising thanks to Taylor and Williamson. While Taylor has kept a calm head inn relying on singles and twos, Williamson has attacked the bowlers using his feet to great extent to deny Ravichandran Ashwin and Ravindra Jadeja any wicket.

Taylor completed his half-century in 54 balls and even completed the 100-run partnership for the third wicket.

Williamson is now the second player to score a half-century in each match of a five-match series. Yasir Hamid was the first to do so against New Zealand in 2003-04. 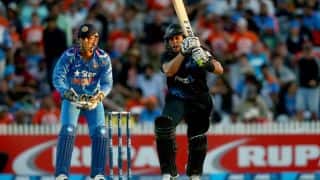