Virat Kohli was dismissed by Nathan McCullum  for 82 in the fifth One-Day International (ODI) against New Zealand at Wellington on Friday. The Kiwis have done well to contain the Indian batsmen but Kohli managed to play some big shots before he was snapped in the 37th over. India need 151 runs in 12 overs.

Kohli came down the track and lofted McCullum towards long-on and ended up giving a catch. Dhoni and Kohli were under pressure to play the big shots with the required rate already beyond 11 an over. The two played some big shots but found it difficult to attack McCullum. Dhoni also survived a close leg-before appeal against him. 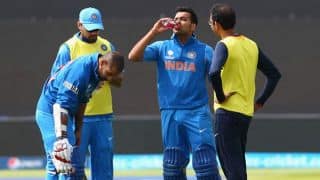 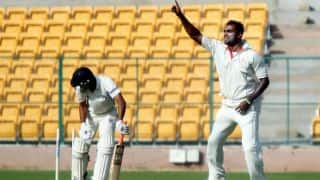 Abhimanyu Mithun: Karnataka have put in a lot of effort at practise for the Ranji Trophy 2013-14