Rohit Sharma and Virat Kohli's half-centuries take India to 269 for 6 against New Zealand in the 5th ODI at Visakhapatnam.

A win followed by a defeat: this has been India’s story so far this series (of course, it would be otherwise for New Zealand). The series is levelled 2-2. And the final match is being played at Dr. Y.S. Rajasekhara Reddy ACA-VDCA Cricket Stadium, Visakhapatnam (no, this is not the longest name you’d come across). The track had no signs of grass on it. It was considered a featherbed for the batters. As a result, toss was crucial for both the teams. It was apparent that the one who calls right will opt to bat first. For that matter, fortune favoured MS Dhoni. Full Cricket Scorecard, India vs New Zealand, 5th ODI

“It looks like a good surface. We have played IPL over here, and then it slowed down a bit. A bit of swing because of the humidity. It’s a decider; makes it more interesting and it will give plenty of experience to the youngsters. As a batting unit, we have not played up to potential,” Dhoni said at the toss. On the other hand, New Zealand captain Kane Williamson said, “Improving is the main thing and we have done that in the ODIs after the Tests. Hopefully we can restrict India to a small total.”

India made a surprising change, replacing fast-bowling all-rounder Hardik Pandya with spinning all-rounder Jayant Yadav. On the other hand, Jasprit Bumrah is back to being in the best of his health, replacing Dhawal Kulkarni.

For New Zealand, all-rounder Corey Anderson replaced Anton Devcich. Hence, the nature of the track suggests how crucial it is to have a long batting line-up.

In other news, we witnessed an unprecedented sight during the series-decider, for Dhoni and co. flaunted their mother’s first name on their jerseys instead of the family name. “We are quite used to having the surnames from the Dad’s side, and what’s important is to appreciate the stuff that Mothers have done for us. It’s a very emotional connect and it’s good that it is put on a public platform. I would like to request the whole of India keeps this in mind every day and appreciate them everyday,” Dhoni added.

India opener Ajinkya Rahane started off the proceedings with staggering cover-drives. However, the track did not dish out the way it was expected to be. Truth be told, few of the deliveries bit the track, making it difficult for the batters to time them to perfection.

Rahane, as we know, struggles when the ball does not come onto the bat well. Although he stuck three lovely boundaries, he perished while trying to clear Tom Latham at short mid-wicket.

Meanwhile, Rohit Sharma looked in ominous touch. As a matter of fact, he averaged only 12 in the last four matches. Therefore, it was imperative that he unleashed the Hitman in him.

Virat Kohli, at the other end, gave maximum strike to Rohit, letting him take the charge. It paid off, as Rohit lofted a back-of-length over long-off; and it came off a pacer. Only Rohit can pull such outrageous shot. To be honest, it looked as if he watched the ball in slow motion, playing it with utmost ease and grace. In addition, it put a smile on Kohli’s face, for the star batsman was in awe of Rohit’s mastery.

The Mumbaikar scored his 19th half-century and first since his swashbuckling 99 since the Sydney ODI in January. However, Rohit hurt his ankle while taking a quick single. Despite getting medical attention, the injury seemed to have bothered, forcing him to go all guns blazing.

He stuck few more stunning boundaries before he holed out to James Neesham at deep mid-wicket. He added 79 runs with Kohli for the second wicket.

With that wicket, the blockbuster duo of Kohli and Dhoni was put in the thick of things.

As the match progressed, it got slower, for even the fantastic duo could not score boundaries at will.

Dhoni took his time to scale up his score, but bludgeoned 3 fours and six as he got his eye in. At same time, Kohli continued being Kohli, as he scored his 38th half-century.

And just when New Zealand needed a wicket, Captain Cool threw away his wicket, getting trapped in front while trying to sweep a full-ish delivery.

Manish Pandey, supposedly India’s new finisher, played a rash shot to deep mid-wicket and soon joined his captain in the pavilion without disturbing the scoreboard.

The onus was yet again on Kohli to take India to a respectable total. Along with him was Kedar Jadhav. But in the process of upping the ante, Kohli lost his cool and smashed it straight to wide long-off.

But Jadhav, along with Akshar Patel, added 46 for the sixth wicket, taking India to 269 for 6. 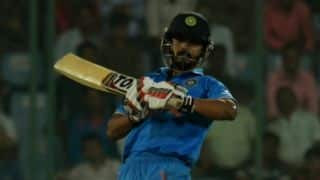