Stand-in skipper Rohit played a brilliant knock of unbeaten 60 to guide India to a competitive total of 163/3 in the fifth and final T20I versus New Zealand at Bay Oval on Sunday. Stand-in skipper Rohit Sharma and opener KL Rahul continued their good of form against New Zealand in the fifth and final T20I in Bay Oval, Mount Maunganui on Sunday to help India post 163 for three in 20 overs. Rahul scored a 33-ball 45 and Sharma scored 60*off 41 balls before he was retired hurt. For New Zealand, Scott Kuggeleijn was the pick of the bowlers as he returned with figures of two for 25 runs in four overs.

Earlier in the day, Sharma won the toss and opted to bat first. The visitors did not get off to a good start as Sanju Samson departed early for two off five balls – looking to play and extravagant cover-drive was caught at covers. With India on the back foot early, Sharma joined Rahul and the two stitched an 88-run stand for the second wicket which brought India back on track. Rahul was the next to depart.

Shreyas Iyer then joined Sharma, who was looking uncomfortable in the middle as his calf was giving him problems. Finally, he decided there was no point risking it further considering it is the World Cup year. He judicially decided to leave the ground.

Shivam Dube came in next, but struggled to get going as his short stay came to an end when he was dismissed for five off six balls, looking to go for the maximum. With a four-ball 11 in the fag end, Manish Pandey gave India the perfect finish.

Iyer remained unbeaten on 33 off 31 balls. 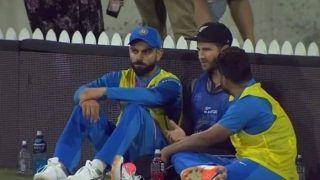