Indian cricket team was accorded a traditional welcome by the ‘Maori’ community upon their arrival at the Bay Oval Stadium in New Zealand’s picturesque Mount Maunganui on Friday (January 25).

The Indian team, who were missing skipper Virat Kohli, was welcomed by a ceremonial ‘Haka’ dance before their practice session. The dance was performed by the members of the Maori community who are the indigenous Polynesian people of New Zealand.

Indian cricketer Shikhar Dhawan said the whole team loved the welcome and the energy the performers created was amazing.

Meanwhile, New Zealand paceman Trent Boult said that the Kiwi bowlers would be aggressive, attack the Indian batsmen from the first ball and try to put the visitor’s middle order under pressure. The two teams will lock horns on Saturday (January 26) for the second ODI.

India had on Wednesday (January 23) beat New Zealand by 8 wickets in Napier to take 1-0 lead in the five-match series. 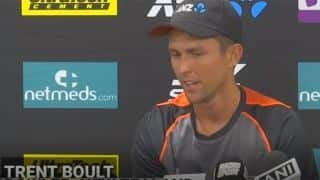