India are currently trailing the three-match ODI series 0-1 after New Zealand rode on Taylor's 21st hundred to chase down their highest total in ODIs.

Despite putting up a mammoth total of 347 onboard in the first ODI, India failed to defend the target against New Zealand as the hosts cantered to an easy win by four wickets at Seddon Park on Wednesday. Suggesting some changes ahead of the second game, veteran ace Harbhajan Singh feels that India should include both wrist-spinners Kuldeep Yadav and Yuzvendra Chahal at Eden Park, Auckland on Saturday (February 8).

“I would like to see both spinners playing together — Kuldeep Yadav and Yuzvendra Chahal,” Harbhajan said on Star Sports.

“This New Zealand team will play fast bowlers on any given day and they will take anyone on. But when it comes to playing spin, it has always been a case for them. You can get those wickets in the middle overs. So I would like to see both the spinners play together. Maybe leave out Kedar Jadhav and play an extra spinner,” Harbhajan added.

After playing all five T20Is versus Black Caps, Chahal was not picked India’s playing XI for 1st ODI in Hamilton. Playing in place of Chahal, Kuldeep failed to make an impression as he was smashed to all parts of the ground by NZ batters.

The chinaman bowler conceded 84 runs in his quota of 10 overs and picked up two wickets. Kuldeep’s figures were the 3rd worst ever by an Indian spinner in 50-over cricket.

In his interview, Harbhajan hinted to drop Kedar Jadhav in order to accommodate both Kuldeep and Chahal in the playing 11. Despite playing a fine cameo of 26 of 15 balls in first match, Jadhav has failed to do much with the ball for the team. His last international wicket came against Australia in Nagpur early last year. Since then, he has got to bowl in nine of the 16 ODIs he has played but failed to pick up a single wicket. 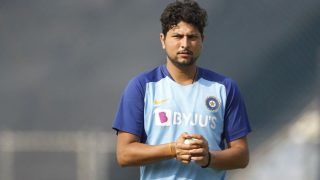