Kane Williamson on Wednesday warned against a "knee-jerk reaction" to New Zealand's eight-wicket loss in the first ODI against India.

Skipper Kane Williamson on Wednesday warned against a “knee-jerk reaction” to New Zealand‘s eight-wicket loss in the first ODI against India and said his team only needs to make “small adjustments” to bounce back in the series.

New Zealand were bundled out for 157 in 38 overs at McLean Park as India returned to overhaul the target in 34.5 overs in the weather-hit first ODI in Napier.  (ALSO READ: Shami, Dhawan headline India’s eight-wicket win)

“It is not our best performance and I think you need to look at it in small bits. It is not about jumping … or any knee jerk reactions to our performance,” Williamson told reporters.

“It is about identifying some areas we need to get better at and when we get it together we can beat anybody but we are against a very strong team in India.”

Williamson said Indian bowlers, mainly spinners, exposed New Zealand’s batting frailties on a tricky wicket. “The surface wasn’t bad but different to what we were expecting. From our perspective, we should have played little bit more smartly on that surface. They perhaps exposed us in some areas. The length that they bowled in that wicket was outstanding and did make scoring hard to achieve, so lot of learning to come.”

Talking about the wicket, Williamson said: “It was one of those surfaces where it is hard to get momentum and they showed us that it wasn’t a competitive total to chase.

“It was not as free-flowing as we were expecting but it is important we move on to the next game, the surface will again be different and we have to be little bit better.”

Williamson said his team has to make better decisions as a unit. “I mentioned about the batting but there were some positives with the bowling but collectively we need to adjust little bit better and often it can come down to make a couple of better decisions,” he said.

Praising the Indian bowling unit, Williamson said: “Their whole bowling unit did not give anything away, it was hard to gain any sort of momentum and the spinners bowled really nicely.

“The middle period… with the spinners on, the way their wrist spinners bowled with pace and the length it was classy. We knew they are good, we have played them a number of times and they certainly were very good.

Asked about Mohammed Shami, who picked three for 19 to became the fastest Indian to claim 100 wickets in One-day Internationals, Williamson said: “He (Shami) was hitting nice areas, he was very demanding and bowled with good pace. I guess you throw those combinations and you get early wickets. 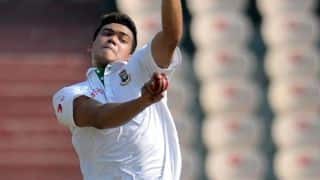