Jimmy Neesham is back into the Test side and says he is fully fit, after playing for Derbyshire in limited-overs cricket.

Jimmy Neesham‘s last Test in Brisbane against Australia, didn’t end quite well for him. Having come back into the side, after being deemed fit, he suffered discomfort in his back while bowling, and was subsequently ruled out of the remainder of the series. Now although, Neesham is back into the Test side and says he is fully fit, after playing for Derbyshire in limited-overs cricket. “The main result for me [from the Derbyshire stint] was I got through the whole season uninjured and basically had no issues with the back at all,” said Neesham, after New Zealand‘s squad arrived in India, as quoted by EspnCricInfo. He added, “So I suppose the aim now is to get the loading up again and make them good enough for Test cricket.” READ: New Zealand name Test squad for tour to India

Neesham said, he had worked on his fitness, while in England. “It was more tweaking little things,” he said. “We did a lot of work on the rehab prior to the Australian series last year, and were pretty comprehensive on that side of things, but I think over in Derby it was more about, I suppose, finding what works and what doesn’t, and changing up especially the gym programme a little bit – basically making cricket the number-one priority as opposed to regaining the strength base and fitness base, which it was before Australia,” Neesham said. READ: India announce squad for Test series vs New Zealand

Ever since his international career began, Neesham feels his batting has become less carefree, and as New Zealand approach the Test series against India, he wants to get back to playing his natural game. READ: India vs New Zealand: Luke Ronchi could be back-up opening option, says Mike Hesson

“I’m basically looking to go back to how I played when I first came in to international cricket. I think I was a bit more carefree and a bit more, I suppose, laissez faire, especially with batting, and then once you start feeling the pressure of international cricket and wanting results and wanting runs, it can curb your game a little bit, which I think is one of the traps I fell into,” he said. “So I’m just looking to go back to playing my natural game. It’s a bit of a cliché, but hopefully runs and wickets will flow from there,” he added.

Although Neesham has toured India earlier, this will be his first outing with the Test side in the country, and he is hoping to bank upon knowledge from experienced players such as Ross Taylor and captain Kane Williamson.

“I’ve had an A tour, Champions League, and then IPL, so I’ve had three tours over here now, and you learn something new every time you come over. And there are obviously guys in the team that have come over here a lot more times than I have, so I’ve been looking to glean some knowledge off guys like Ross and Kane, especially about playing spin and playing their spinners in particular, but I think, as I said before, if you play your natural game and have some clear plans about how you’re going to go about scoring runs, then that should hold you in good stead,” he said. 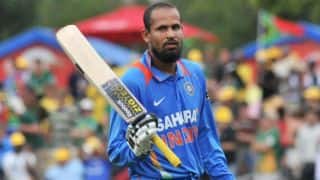 Yusuf Pathan lands in India without luggage; Kenya airlines says it wasn’t on the flight