Catch Live updates of Day One of the first Test here.

NZ 329/4 | Overs 90
McCullum 143*, Anderson 42*
That is the end of day’s play! New Zealand have done exceedingly well to get out of a muddle and finish off on a high. Kane Williamson was brilliant. But, Brendon McCullum has played a true captain’s knock. We’ll be back with more tomorrow. Do join us for Day Two.
NZ 314/4 | Overs 86
McCullum 136*, Anderson 34*
The Indian pacers start fresh with the new ball. Zaheer and Ishant get good carry and bowl a tight line but the batsmen are settled in. The runs have dried up, but McCullum still solid while Anderson is easing in to his strokes after a slow start.

Midas touch with the toss! MS Dhoni has won the toss again and has elected to bowl in the first Test. The green wicket and overcast conditions have kept the captains interested in bowling first.

So the news is, Ishant Sharma remains in the side, and the Indians will get a good chance to make early inroads on the seamer friendly wickets. Dhoni is clear, that the bowlers need to pitch it up. Zaheer Khan will be the key.

The toss has been delayed due to bad light and slight drizzle. Steve Davis and Richard Kettleborough are inspecting the conditions. The cloud cover has reduced and the toss is not far away.

Hello and welcome to the live updates of the first Test between India and New Zealand at Auckland. I am Abhijit Banare and I will be bringing you the updates of Day One of the Test. After the 4-0 victory, New Zealand will back themselves to push the World No 2 Test side. India have a challenge ahead of them and it would be interesting to see how they live up to it. The last time around, in 2009, they defeated a weaker Kiwi team 1-0 in tests but this time, it’s not a walkover. June 2011 was the last time the Indians won an away Test match. It’s time Dhoni and his team sets the record straight away before it becomes a psychological scar.

In the first Test at Auckland, swing is going to be a major factor for both the Indian batsmen and the bowlers. The batsmen need to negate the formidable Kiwi pace attack led by Tim Southee, Trent Boult and Neil Wagner in their ranks. Meanwhile the Indian pacers, with spearhead Zaheer Khan at the forefront, will be eager to exploit the conditions.

Catch the Preview of the first Test here.

Brendon McCullum seems to be all geared up for the Test. 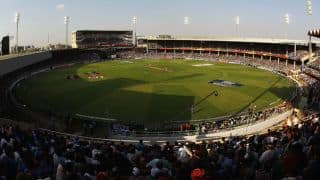 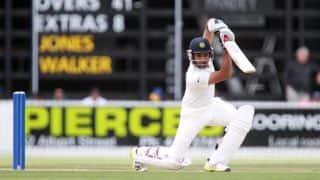