The light does not seem to improve and the umpires have called stumps early on Day Two of the first Test. India are at 130 for four and they trail New Zealand’s 503 by 373 runs. Rohit Sharma is batting on 67 and Ajinkya Rahane is on 23. That is all from us on Day Two. Join us again on Day Three for the live updates. Have a good day.

IND 130/4 | Overs 39
Rohit 67*, Rahane 23*
Sodhi comes in and Rohit hits that towards mid-on and takes off for a quick single. The batsmen almost get in each others’ way while running, but manage to avoid a collision and complete the run. Williamson bowls a length delivery and Rohit comes down the track and lofts one over deep mid-wicket for a six. Sodhi bowls a full delivery and Rahane plays an inside-out shot over extra-cover for a four. Play has been stopped due to bad light. The umpires are discussing the situation, so, there will be a break in play. We will be back as soon as play resumes.
IND 115/4 | Overs 36
Rohit 58*, Rahane 18*
Southee bowls a length delivery and Rohit comes on the front-foot and drives that wide of mid-off for a four. Sodhi is getting to bowl on a better line and length now. Plus he is getting the ball to spin and bounce, so, the batsmen have to be careful. The lights are fading at Eden Park and the umpires are having a discussion with Brendon McCullum. So, not to waste more time, McCullum brings spinner Williamson into the attack. He gives away two runs in his first over.

IND 108/4 | Overs 33
Rohit 53*, Rahane 16*
Southee gets a length delivery to find the outside edge of Rahane’s bat, but the ball just bounces short of the second slip. Sodhi has been brought into the attack. He is getting the ball to spin away from the right-handed batsmen. Southe comes in and Rohit gets to his half-century with a single towards mid-wicket. Funnily, this is Rohit’s first Test half-century. The other two times he has crossed the 50-run mark, he has gone onto score centuries. Rahane pushes one from Southee to deep point and gets three.

what is it about the commentary box that makes it a tiring place to be #zzzzzz pic.twitter.com/L4T9KYQfl4

NZ 353/4 | Overs 95
McCullum 153*, Anderson 56*
Zaheer Khan begins proceedings on Day Two for India. Brendon McCullum gets a thick outside edge and gets four runs past the slips. Ishant Sharma gives only one run away in his first over. Corey Anderson edges one from Zaheer towards third-man for a four. McCullum drives a half-volley from Zaheer towards long-off for another four. McCullum has gone past 150 now. Anderson then gets an outside edge off Ishant’s bowling and the ball races away for a four towards third-man. He reaches his half-century. Ishant bowls a back of a length delivery down the leg side and Anderson plays that off the back-foot for a four towards fine-leg.

Hello and welcome to the live updates of the first Test between India and New Zealand in Auckland. I am Shrikant Shankar and I will be bringing you the updates of Day Two of the Test. India had won the toss on Day One and elected to bowl first. New Zealand went onto to score 329 for four. Kane Williamson scored 113 and Brendon McCullum is batting on 143. Corey Anderson is batting on 42. Zaheer Khan and Ishant Sharma have taken two wickets each so far.

Read our live updates from Day One here. Read our Day One report of the first Test here. 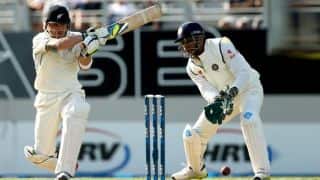 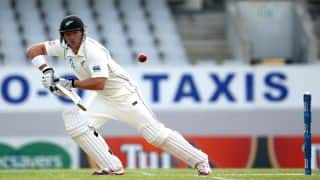