New Zealand trail India by 222 runs at stumps on Day Two of the second Test in Wellington.

(Trailing by 222 runs at the start of Day Three, New Zealand have a task at hand to erase the deficit and add more runs to challenge India in the second Test at Wellington)

NZ 252/5 | Overs 99
McCullum 114*, BJ Watling 52*
Exceptional fightback from New Zealand. This unbeaten 158-run partnership has ensured that India are not only going to bat again but the Kiwis. New Zealand were five down for 94 but this partnership has now gone on for 257 minutes. Not to take any credit away from the India bowlers, their discipline ensured that New Zealand didn’t run away with the game. An exciting Day Four is on the cards. And finally not to forget, India will have to blame themselves for not grabbing the opportunities to dismiss McCullum when he was batting on nine and 36.

NZ 250/5 | Overs 94
McCullum 113*, BJ Watling 51*
190 balls for his 7th Test fifty. A stubborn innings from BJ Watling and the partnership with McCullum continues. New Zealand now have a lead. India looking wary now as the duo continue to pile on runs. The new ball hasn’t done any magic. To be fair, Indian pacers have bowled well but this is top-class batting Watling and McCullum. Not to forget, the two dropped catches of McCullum is haunting India now. New Zealand now lead by four runs.
NZ 230/5 | Overs 88
McCullum 100*, BJ Watling 47*
Century No 9 for the New Zealand skipper. What an innings it is; this is McCullum’s slowest Test ton so far. But he won’t mind that as the rescue mission is on the right track. Similar to the first Test, McCullum’s gets to his century with a six over long-on off Ishant Sharma’s bowling.
NZ 221/5 | Overs 87
McCullum 94*, BJ Watling 45*
McCullum is inching towards his ninth Test hundred and New Zealand look well on course for making India bat again. Zaheer and Shami using the new ball in search of that breakthrough.
NZ 213/5 | Overs 83
McCullum 87*, BJ Watling 45*
McCullum is back to his natural game. Smashes couple of boundaries off Mohammed Shami’s bowling. That’s McCullum for you, the new ball doesn’t matter, if it’s there in the slot he hits hit. New Zealand are closing in on erasing the deficit. Watling though hasn’t been comfortable against the pacers. Nevertheless the partnership of 119 has kept New Zealand’s hopes alive. It’s Drinks in the third session on Day Three.

NZ 199/5 | Overs 81
McCullum 77*, BJ Watling 43*
After finishing off the few overs post tea with Jadeja and Zaheer, Dhoni has accepted the new ball and Zaheer Khan started off with the new cherry. The first ball is clipped by McCullum for a boundary. But Watling has a tough time facing Zaheer. He’s beaten on the first ball and then survives a leg-before appeal. New Zealand train by 47 runs.
NZ 191/5 | Overs 76
McCullum 71*, BJ Watling 41*
McCullum is slowly easing into his aggressive mode. Has used some opportunities to hit in the gaps and collect a few boundaries. They are closing in on erasing the deficit with 55 behind. Watling on the other end too is looking solid. The partnership is worth 97 rns.

Intriguing field placement for Shami to Watling, what do you think is the plan here? #Nzvind ^RI pic.twitter.com/Gr0OWsZVxR

NZ 173/5 | Overs 71
McCullum 60*, BJ Watling 35*
New Zealand are taking their chances to score runs and in the process have offered a few wicket-taking opportunities. Watling was almost done in by a knuckle ball from Zaheer. In the 71st over by Shami, Watling cut him past point for a boundary to complete 1,000 Test runs.
NZ 158/5 | Overs 68
McCullum 54*, BJ Watling 26*
29th Test fifty for Brendon McCullum. An uncharacteristic innings from McCullum; hardly any aggressive shots, just five boundaries in 146 balls. This is McCullum’s slowest Test fifty so far.
NZ 148/5 | Overs 66
McCullum 46*, BJ Watling 24*
A slow start for New Zealand post tea. Zaheer and Jadeja start the proceedings post break.
NZ 146/5 | Overs 64
McCullum 44*, BJ Watling 24*
TEA! It’s been a solid fightback from Brendon McCullum and BJ Watling. They have added just 52 runs in 160 balls. The innings has dragged on but more significantly, they haven’t conceded any wicket. Indians will rue the fact that twice they had the opportunity to dismiss McCullum.
NZ 139/5 | Overs 58
McCullum 43*, BJ Watling 19*
Zaheer Khan has replaced Ishant Sharma while Jadeja continues to bowl from one end. McCullum is playing one of the most patient innings of his career. Inching close to a half-century.

NZ 132/5 | Overs 55
McCullum 38*, BJ Watling 17*
Dropped! Ishant drops a simple return catch. McCullum had committed himself for a shot and ends up playing it back to the bowler. On any other occasion it would have been a simple catch but Ishant is in no position to take that catch, didn’t even get a hand to it. McCullum has been dropped twice now even if you ignore the tough chances.
NZ 129/5 | Overs 53
McCullum 35*, BJ Watling 17*
BJ Watling survives. Ishant is bowling with some venom here. He gets McCullum to edge and the ball falls just short of Dhoni. The next ball, Watlling gets a ripper which rises from good length and races to the keeper’s gloves. Fine over by Ishant.
NZ 121/5 | Overs 50
McCullum 30*, BJ Watling 15*
Jadeja continues to keep the run-flow in check from one end while Ishant is pitching at a good line to keep BJ Watling tied up. In the 50th over, Jadeja comes over the wicket and forces Watling to defend on the leg-side. It’s Drinks in the second session on Day Three.
NZ 113/5 | Overs 45
McCullum 27*, BJ Watling 10*
Excellent field placing by MS Dhoni. The Indians sense that McCullum is the key wicket and have stifled him with an attacking field. The Kiwis skipper hasn’t been able to do much but defend it. Ishant Sharma is back in to the attack.
NZ 98/5 | Overs 42
McCullum 21*, BJ Watling 2*
Ravindra Jadeja’s tight line has annihilated the New Zealand scoring. Shami has been accurate checking McCullum’s patience while on the other end, Jadeja bowled to Watling with an attacking field in place.
NZ 94/5 | Overs 37
McCullum 19*, BJ Watling 0
Soft dismissal. Corey Anderson tries to work Jadeja’s delivery on the leg-side, instead gets a leading edge and is caught by the bowler. The Kiwis batting has looked extremely brittle this Test.
OUT! Anderson 2(6)
NZ 87/4 | Overs 34.1
McCullum 14*
It’s Lunch on Day Three. India are inching closer to their first Test win away from home since June 2011. They picked up three wickets in this session. Mohammed Shami who has been disciplined right through the innings finally gets a wicket. After a determined stay at the crease, Tom Latham pushes at a delivery only to edge it to Dhoni.
OUT! T Latham 29(64)
NZ 81/3 | Overs 29
Latham 25*, McCullum 12*
Dropped! Brendon McCullum went for the on-drive. Didn’t time it well and Kohli at short mid-on floored a relatively easy catch. A wicket opportunity for Mohamed Shami gone. He has been unlucky in this series not getting a wicket despite an impressive performance.
NZ 77/3 | Overs 26
Latham 24*, McCullum 9*
Tom Latham slowly getting in to the groove. In the 25th over, he tries to pull a short one from Zaheer, gets a top-edge which flies to boundary. The next ball was pulled right off the middle of the bat for a boundary. Ishant Sharma in the next over bowls a disciplined line.
NZ 61/3 | Overs 23
Latham 13*, McCullum 4*
It’s been a fighting stay at the crease so far for Brendon McCullum. Played 16 balls for his four runs. Dhoni persists with Zaheer who as looked good this morning getting the ball to swing.
NZ 52/3 | Overs 17
Latham 8*
Zaheer is in the midst of an impressive spell here. Gets the ball to move from the seam and has used the knuckle ball as well. This one is seaming away from left-handed Rutherford who edges it to Dhoni behind the wickets. It was a perfect delivery, forced Rutherford to come on the frontfoot.
OUT! H Rutherford 38(55)
NZ 41/2 | Overs 15
Rutherford 28*, Latham 4*
After two overs from Ishant, Dhoni has brought in Mohammad Shami who delivers a tidy first over to Tom Latham. Rutherford in the next over of Zaheer looks comfortable against Zaheer with one cover drive going straight to fielder and follows it up with thick edge going past gully for a boundary.
NZ 27/2 | Overs 11
Rutherford 18*, Latham 0*
Big WIcket for India. The in-from Kane Williamson is caught behind in the second over of the day. It was a delivery by Zaheer Khan which was leaving the right-hander and Williamson tentatively prodded at it. The faint edge convinced umpire Richard Kettleborough and India are off to a great start. Earlier, Ishant Sharma started the prooceedings and bowled a good first over.
OUT! Williamson 7(22)

Hello and welcome to CricketCountry’s live updates of Day Three of the second Test between India and New Zealand at Wellington. I am Abhijit Banare and I will be bringing you the live updates. India produced a solid display against New Zealand on Day Two. They have a lead of 222 runs at stumps. New Zealand are at 24 for one with Hamish Rutherford batting on 18 and Kane Williamson on four.

Peter Fulton was the only wicket to fall for the Kiwis in their second innings for one. He offered no shot to an in-swinging delivery from Zaheer Khan that clipped the top of the front pad. He was out leg-before. Earlier, India were bowled out for 438 in their first innings. Ajinkya Rahane top-scored with 118 off 158 deliveries. MS Dhoni scored 68 of 86 deliveries. Zaheer added a quick-fire 22 off 19 deliveries.

Rutherford and Williamson will be looking to build a solid partnership to try and reduce the deficit as much as possible. India, though, will be looking for some early wickets to try and finish off the match in less than three days. Catch the highlights of Day Two here.

Chaps in the nets. Beautiful day again in Wellington, play starts in just under half an hour ^RI pic.twitter.com/RwQ496aR6o 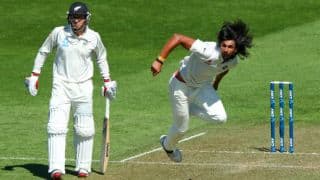 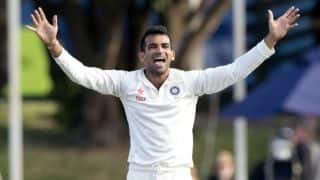