Catch Live updates of Day Three of the second Test between India and New Zealand here.

(Brendon McCullum and BJ Watling continue New Zealand’s fightback and torment India. They shared a record 352-run partnership to give New Zealand a fair chance of winning this Test)

NZ 571/6 | Overs 189
McCullum 281*, Neesham 67*
STUMPS: McCullum is now well on course for eclipsing Martin Crowe’s record of 299. But what a sensational effort from McCullum and Watling. New Zealand were 94 for five on Day Three and they will be walking in to bat thinking of a win. They have a lead of 325 runs.
NZ 548/6 | Overs 184
McCullum 276*, Neesham 49*
300 the lead now for the Kiwis and this match is almost out of India’s hands. McCullum’s marathon innings is now the longest innings played by a New Zealand batsman. He has also surpassed Fleming’s highest career score of 274 against Sri Lanka in Colombo. The century partnership also comes between Neesham and McCullum.
NZ 518/6 | Overs 177
McCullum 266*, Neesham 32*
There you go, one more feat surpassed with a six. This time McCullum goes past Stephen Fleming’s 262 with a six over long-on off Jadeja. There’s one more Fleming record on offer i.e. his highest of 274 at Colombo against Sri Lanka in 2002-03.
NZ 502/6 | Overs 172
McCullum 253*, Neesham 30*
50-run partnership between McCullum and Neesham and they have also brought up the 500 runs for New Zealand. Neesham has provided good support to keep this match interesting.
NZ 492/6 | Overs 169
McCullum 251*, Neesham 23*
Six! that’s 250 for Brendon McCullum. Seems to have made a habit to get 50s and 100s with a boundary. Pulss one from Shami from the middle of the bat over square-leg. Neesham adds more on the last ball with a boundary.
NZ 467/6 | Overs 165
McCullum 242*, Neesham 8*
McCullum is losing his patience now. He is trying to chase anything pitched outside off and moving away and has been beaten on a few occasions by Zaheer and Shami.

NZ 449/6 | Overs 161
McCullum 231*, Neesham 1*
Finally India have a wicket. The sensational 352-run stand comes to an end. Shami strikes with the new ball. There’s a leg-before appeal which was turned down before but Shami goes much fuller and Watling goes on the backfoot and is struck on the pads.
OUT! Watling 124 (367)
NZ 446/5 | Overs 160
McCullum 229*, BJ Watling 124*
Virat Kohli takes off his keeping gloves and bowls. And McCullum-Watling have surpassed highest ever sixth-wicket partnership in Tests.

Well, this wish of a cricket fan before the start of day’s play has come true.

Even the Indian fans were shouting for the @BLACKCAPS today. #nzvind ^JP pic.twitter.com/YSH1z1OlII

NZ 445/5 | Overs 159
McCullum 229*, BJ Watling 123*
Virat Kohli keeping wickets for the second time in his career which in other words means MS Dhoni is bowling. Tidy first over from Dhoni, concedes five runs. The duo meanwhile complete the 350-run partnership.
NZ 440/5 | Overs 158
McCullum 228*, BJ Watling 119*
TEA on Day 4. Virat Kohli is tightening up the batsmen but they are no sort of discomfort. Another sensational session this for New Zealand. All kinds of records tumble, McCullum completes his 3rd double ton, Watling his gets his 3rd Test ton. Indian bowlers are have been tired out as the lead is now 194 runs and the partnership is of 346 runs.

well played mccullum and watling. whatever the conditions and the bowling, this is outstanding and worthy of a standing ovation.

The highest ever total in the 3rd inngs of a Test match? No surprise! also at Basin Reserve,Wellington 671/4 by NZ v SL in Feb 1991 #NZvInd

NZ 422/5 | Overs 151
McCullum 215*, BJ Watling 115*
Finally Dhoni gets Rohit Sharma and Virat Kohli. The pacers seem to be tired but still it has been a laudable effort from Indian bowlers. They haven’t given away easy runs but McCullum and Watling have been simply outstanding.

The way McCullum is batting, Craig McMillan’s prediction might just be true, that would be a nightmare for India. Well Martin Crowe scored 299 at this venue.

NZ 401/5 | Overs 145
McCullum 205*, BJ Watling 105*
There it is, third double century for Brendon McCullum. First New Zealand player to score consecutive double centuries. All his double tons have come against India. As it has been in this series, McCullum gets to his double ton with a boundary. And 400 up for New Zealand.

NZ 394/5 | Overs 143
McCullum 199*, BJ Watling 105*
It’s drinks in second session on Day Four. These two are showing no signs of giving away. The partnership is now worth 300 runs and McCullum is getting a bit edgy batting on 199.
NZ 389/5 | Overs 140
McCullum 194*, BJ Watling 105*
Third Test ton for BJ Watling. He came in to bat when the team was on 94 for five and has batted for 293 balls and over 400 minutes for his century. India seem to be on the wrong side of a record here. To read more about Watling’s innings click here. The lead is now 143 runs.
NZ 379/5 | Overs 132
McCullum 191*, BJ Watling 99*
Watling moves to 99 with a four pulling it past fine-leg. This will be his third Test ton if he gets there. The partnership in the meanwhile has flooruished and has become the highest ever partnership for New Zealand against India in Tests going past Jesse Ryder and Ross Taylor who shared a 271-run stand in 2009 at Napier.

This is the longest ever Test innings played by a New Zealand wicketkeeper. The previous best was by Brendon McCullum scoring 143 against Bangladesh batting for 339 minutes. Watling has batted for over 400 minutes now.

NZ 360/5 | Overs 132
McCullum 179*, BJ Watling 92*
Mohammed Shami maintaining some good line and length to keep the batsmen in check. In his previous over, he managed to get past the defense of McCullum who was hit high on his pads; the leg-before appeal was turned down by Steve Davis. Meanwhile, here’s a report on the some records surpassed by these two for the sixth-wicket partnership.
NZ 353/5 | Overs 129
McCullum 173*, BJ Watling 91*
Suddenly McCullum wants to go after the bowling post lunch. Comes down the track against Jadeja and mistimes the shot.
NZ 347/5 | Overs 127
McCullum 169*, BJ Watling 90*
It’s Lunch on Day Four. There’s the 250-run partnership between McCullum and Watling in the 126th over. And the lead has touched the 100-run mark as well. What a session it has been, great concentration from the two to fight it out on the fourth morning. This already the second-highest sixth wicket partnership for New Zealand.
NZ 331/5 | Overs 122
McCullum 161*, BJ Watling 82*
Dropped! A tough chance but at this stage it was there to be taken. Brendon McCullum finally nicks on from Zaheer to the slips, Shikhar Dhawan is the only fielder there standing wide near the second slip . He dives to his right but the ball brushes past his fingers for a boundary.
NZ 321/5 | Overs 120
McCullum 157*, BJ Watling 76*
Jadeja has done well to block the flow of runs from one end but that has not broken the patience of McCullum and Watling. Zaheer Khan bowling from the other end maintains a tight line outside off-stump.
NZ 321/5 | Overs 116
McCullum 157*, BJ Watling 76*
Exceptional determination from Brendon McCullum. At the end of the third day, he kept saying that the job is not yet done. And here he is defying the pacers to see off the fourth morning. A consecutive double hundred is on the cards. Gets to his 150 with a boundary.
NZ 291/5 | Overs 109
McCullum 135*, BJ Watling 69*
Dhoni looking desperate for a wicket. Consistently kept shuffling the off-side field with McCullum on stroke. Shami concedes a boundary in the 108th over. Shami in his next over bowls at a much fuller length, Watling on one ball gets a thick outside edge which runs past gully for a boundary.
NZ 274/5 | Overs 104
McCullum 128*, BJ Watling 59*
Good bowling by Ishant. Gets a delivery to cut back in to McCullum. The New Zealand skipper puts his stride forward and is hit on the pads. The loud appeal is immediately turned down by umpire Steve Davis. In the previous over, Zaheer Khan misses his length trying to bowl the knuckle ball thrice and on one occasion it turns in to a juicy full-toss for Watling to be dispatched to the fence.
NZ 256/5 | Overs 101
McCullum 115*, BJ Watling 55*
Ishant Sharma starts off the day with a disciplined line and length. All the six balls landed right in the corridor of uncertainty and McCullum is watchful to let it go to the wicketkeeper. Zaheer Khan starts from the other end. Slightly wayward, offers a fuller length ball to Watling and he drives through the covers for three runs. McCullum on the next one works it away on the leg-side for a single.

Hello and Welcome to the live updates of Day Four of the second Test between India and New Zealand. I am Abhijit Banare, and I will be bringing you the live updates of the match. An exciting fourth day is on the cards. While many would have though of the Kiwis folding up early and conceding an innings defeat, the match is still alive with a stubborn fightback from Brendon McCullum and BJ Watling. McCullum is unbeaten on 114 while Watling is on 52. New Zealand by virtue of erasing the deficit are six for the loss of five wickets, but the Indians still won’t have it easy as this unbeaten pair will look to add more runs and there are a few handy batsmen to follow. There’s not too much grass today, though the pace and bounce still remains intact. A  good pitch to bat on and the pacers need to fight it out to earn the wicket of the two batsmen. New Zealand have opted for a heavy roller to flatten the pitch more.  Catch the highlights of the third day here.

Well, the Indians will have to hold on to their catches for sure. They have already let off Brendon McCullum twice on Day Three and the eventual result of the day is there for everyone to see.

India working on their slip catching before the start of play. #nzvind ^JP pic.twitter.com/QMcCGA2zpa 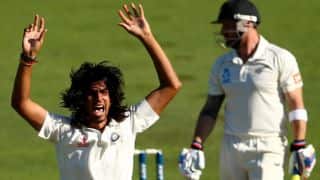 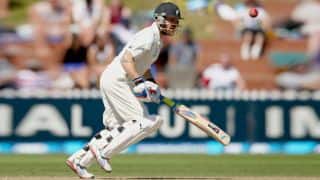