India will face New Zealand for the play of Day Three of the second Test at Eden Gardens, Kolkata. Catch the live cricket streaming of India vs New Zealand second Test at Kolkata on StarSports.com and Hotstar. The live streaming will take forward the series wherein India will be eager to seal the series whereas New Zealand will like to level the three-Test series. After a struggling start to their innings, India did manage to get their score near the 250-run mark with some outstanding batting from Cheteshwar Pujara and Ajinkya Rahane. But it was Wriddhiman Saha who held on the nerves on Day Two as he helped India post a decent total of 316. Saha remained unbeaten on 54. India started the second innings on a nice note as they went on picking up New Zealand wickets at regular intervals. The day’s play was interrupted due rain, but it was Bhuvaneshwar Kumar who destroyed the visitors as he took 5-33 to take New Zealand to 128 for the loss of seven wickets at Day Two Stumps.

Despite less than 53 overs possible, the second day s play was highly eventful and India completely outplayed the visitors. First, it was Wriddhiman Saha, who denied New Zealand the early advantage by crafting a defiant 54 not out. The new ball and the barrage of hostile short balls from Trent Boult and co. did not bog him down. He mixed caution with aggression to help India win the morning battle against the Kiwi pacers. The Indian cricket team elected to bat after the toss going in their favour, and despite decking up their batting order with six specialist batsmen once again in their ranks; they produced an ordinary show with the bat. Pujara and Rahane added 141 runs for the fourth wicket, which provided India with the platform to take their total past 200. Matt Henry was the pick of the bowlers for New Zealand, returning with the figures of 15-6-35-3. Off-spinner Jeetan Patel claimed two very important wickets for the Kiwis as the hosts crumbled against both pace and spin.

Asked whether there was any added pressure on him, he said, There was no extra pressure on me. I am happy with the way I bowled. The pitch had a lot for the bowlers and I exploited that. Later at the press conference after the end of the day s play, Indian wicket-keeper Wriddhiman Saha lauded Bhuvneshwar s efforts. He bowled beautifully. The wicket assisted bowlers and I thought the way he went about his job was exceptional. Even [Mohammed] Shami, Ash [Ravichandran Ashwin], Jaddu [Ravindra Jadeja] bowled well, Saha said. Bhuvneshwar was not picked for the first Test at Kanpur. Umesh Yadav was preferred instead of him. After picking up a five-wicket haul in his last appearance at the Caribbean, Bhuvneshwar has once again delivered for India.

India are in commanding position in the second Test at the moment as New Zealand have managed to score just 128 for 7 before bad light stopped play. New Zealand are still 188 runs behind with just three wickets remaining. The visitors have BJ Watling and Jeetan Patel at the crease and it is very much expected that their innings gets done in quick time, or else these two will have to play to the best of their abilities to toil as much as time as they can. 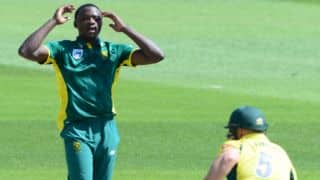