India will cross swords with New Zealand on Day Four of the second Test of the three-match series at the iconic Eden Gardens in Kolkata. Catch the live cricket streaming of India vs New Zealand second Test at Kolkata on StarSports.com and Hotstar. The live streaming will take forward the series where India will look forward to win the the series and New Zealand on the other hand will be looking to save the Test and give themselves a surviving chance in the three-match series. Day 3 ended in India’s way as they were comfortably placed at 227 for the loss of eight wickets with Wriddhiman Saha at the crease. India now have a healthy lead of 339 runs and will look to add some more on Day 4. They have dominated the game so far and now seems to be in a good position.

In the first innings, India did well to post 316 run son board after Kiwi seamers chipped early wickets. Ajinkya Rahane and Cheteshwar Pujara played sensibly to get India in a good position. Saha remained unbeaten on 54 while wickets tumbled at the other end. New Zealand batting once again collapsed as Bhuvneshwar Kumar steamed in and chipped in with some key wickets. He was unplayable and made good use of the overcast conditions. He claimed a fifer, which was also his first at home. He broke the spine of New Zealand batting with his swing and control.

New Zealand resumed Day 3 from their overnight score of 128 for the loss of seven wickets. BJ Watling and Jeetan Patel adding some crucial runs at the start of the day and helping New Zealand post 204 on board. India had a healthy lead to their name but once again their top-order floundered and put pressure on the middle-order to fire. Kohli played a composed knock of 45 but it was Rohit Sharma who steal the show at Eden Gardens. He went on to play one of the best innings of his Test career as he smashed a brisk 82 off 132 balls. His innings contained nine boundaries and two sixes as India added another 227 runs to their existing lead. ALSO READ: IND vs NZ, 2nd Test: How can visitors bounce back?

India will look to add some more runs on Day and invite New Zealand to bat. New Zealand can either win the game or lose it, there are no half measures as a result is evident with two day’s game yet to play. New Zealand batsmen will have to pull up their game in order to chase down the total, which is unlikely. Expect some more action as India may also win the game on the fourth day itself considering the vulnerability of the New Zealand batting.

One can expect an early start to the Day 4 play as bad light didn’t let the full overs to be bowled on Day 3. If the game does starts early the live streaming will start at 9:00 IST. The third and final Test will be played at Indore. 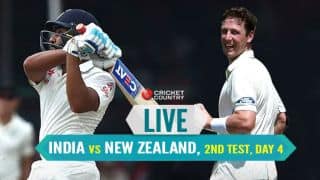