Live cricket streaming of the India vs New Zealand, 3rd ODI at Mohali: excerpt: India and New Zealand are currently levelled at 1-1.

India take on New Zealand in the third contest of the five-match One-Day International (ODI) series at the Punjab Cricket Association (PCA) Stadium in Mohali on Sunday. The live cricket streaming of the match is available on Hotstar, while the live telecast of the match shall be available on Star Sports 1, Star Sports HD1, along with Hindi commentary on Star Sports 3, and Star Sports HD3. The five match series is currently levelled at 1-1, with India registering an emphatic win over New Zealand by 6 wickets in the opening ODI at Dharamsala, while New Zealand bouncing back in the second game in Delhi and winning the cliff-hanger by 6 runs. FULL CRICKET SCORECARD: India vs New Zealand, 3rd ODI at Mohali

The first game of the series was played at the picturesque location of Dharamsala, a beautiful Himalayan city in the lap of nature. A clinical performance by the home side saw them get across the line quite comfortably. Opting to bowl first, India had New Zealand reeling at 7 for 65 at one stage. However, a carry-the-bat effort by Tom Latham and late order blitzkrieg by bowler Tim Southee saw the tourists post a respectable 190 on the board. Hardik Pandya, India s debutant in the game, performed exceptionally well with the ball and earned the Man-of-the-match award, thus becoming the fourth Indian to do so on ODI debut. LIVE BLOG: INDIA VS NEW ZEALAND 3RD ODI

The win was India s 108th under maverick skipper MS Dhoni, thus making him the second most successful captain in the history of ODIs after former Australian skipper Ricky Ponting. It was also India s 900th ODI. The fortunes reversed in the next game at Delhi. Though India once again won the toss, the match was won by the visitors. Once again put into bat first, New Zealand were at one stage cruising towards a huge total. Their skipper Kane Williamson finally came to party and scored his first ODI ton on Indian soil, thus helping his side post 242. India vs New Zealand, 3rd ODI, Preview & Predictions.

This big a total, though it was not exactly big, was never chased under lights in Delhi. And the record stood unbroken, as India ended up six runs short of New Zealand s effort in the end. Almost all the Indian batsmen got starts but no one really got going, thus making it difficult in the end. Kedar Jadhav (41), Dhoni (39) and Pandya (36) tried hard to push for a win but India fell agonisingly short of the victory line. 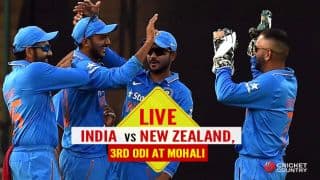