Statistical highlights on the third day of the opening cricket Test between India and New Zealand at Rajiv Gandhi International Stadium on Saturday. 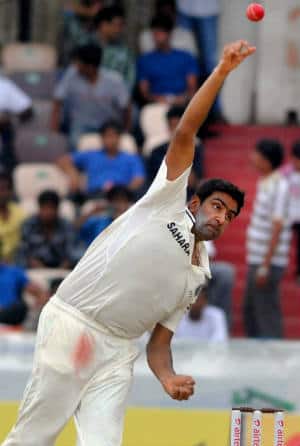 Statistical highlights on the third day of the opening cricket Test between India and New Zealand at Rajiv Gandhi International Stadium on Saturday.

# Ashwin (6 for 31) has registered his best bowling performance in an innings in Tests, surpassing the 6 for 47 against the West Indies at Feroz Shah Kotla, Delhi in November 2011. His figures are also his best in first-class cricket.

# Ashwin’s economy rate of 1.87 is also his best in a Test innings.

# Ashwin has bagged five wickets or more in an innings thrice – twice against the West Indies and once against New Zealand.

# Ashwin’s bowling figures are the fourth best in an innings for India against New Zealand in Tests. Srinivas Venkataraghavan holds an Indian bowling record against New Zealand, having taken 8 for 72 in Delhi in 1964-65. He is followed by Erapalli Prasanna’s eight for 76 at Auckland in 1975-76 and Subhash Gupte’s seven for 28 at Fateh Maidan, Hyderabad in 1955-56.

# New Zealand’s 159 is the first total of less than 200 at Rajiv Gandhi International Stadium.

# Chris Martin, with his 34th duck in Tests, has extended his unwanted record for New Zealand. Courtney Walsh (43) and Glenn McGrath (35) are the only two batsmen with more ducks than Martin. (PTI)