Statistical highlights on the fourth day of the second cricket Test between India and New Zealand here today. 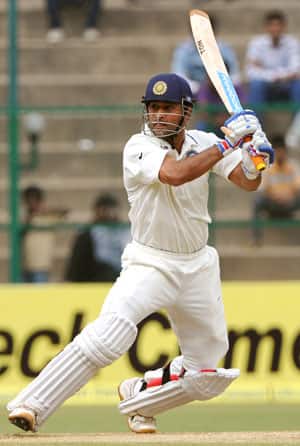 Statistical highlights on the fourth day of the second cricket Test between India and New Zealand here today.

# India’s above score is their fifth highest fourth innings successful chase in Test Cricket — the highest is 406 for four against the West Indies at Port of Spain in 1975-76.

# Mahendra Singh Dhoni has played four successive innings of 45 or more against New Zealand — 98 at Nagpur in 2010-11; 73 at Hyderabad and 62 & 48 not out at Bangalore in the just concluded series.

# The five-wicket win at Bangalore is India’s 14th out of 20 played at home under Dhoni’s leadership — the most by an Indian captain on Indian soil, overtaking Mohammad Azharuddin’s tally of 13 wins in 20 Tests.

# The unbroken match-winning 96-run sixth wicket partnership between Dhoni and Kohli is India’s third highest in the fourth innings of a Test match — the highest is 136 between Sachin Tendulkar and Nayan Mongia against Pakistan at Chennai in January 1999.

# Tendulkar has been dismissed ‘bowled’ in three innings in a row — a dubious distinction recorded by him for the second time in Tests — the first instance was against England in England in 2002 when he was bowled by Matthew Hoggard, Dominic Cork and Michael Vaughan.

# Suresh Raina has recorded his sixth duck in Tests — his second against New Zealand.

# Virat Kohli has posted five innings of fifty or more in succession in Tests in India — 52 & 63 against the West Indies in Mumbai in 2011-12 followed by 58 at Hyderabad, 103 & 51 not out at Bangalore — all three in the series against New Zealand.

# Kohli enjoys an outstanding record in Tests in India — his tally being 327 at an average of 81.75. He became the sixth Indian player to post a hundred and a fifty in a Test match against New Zealand. Rahul Dravid had registered the said feat twice, including a century in each innings once.

# Kohli has got his first Man of the Match award for posting two excellent knocks. He has registered a hundred and a fifty in the same Test match for the first time.

# Zaheer Khan has become the eighth Indian bowler to complete 100 wickets or more in India.

# Pujara has top-scored in the series — 216 at an average of 72.00 in three innings, including a hundred — his best performance in a Test series.

# Ravichandran Ashwin has been adjudged the Player of the Series for capturing 18 wickets at 13.11 runs apiece — the most by a bowler in the series.

# Besides his excellent bowling performance, he has totalled 69 runs at an average of 69.00 as a batsman.

# Ashwin, in four Indian victories, is averaging 17.74, claiming 31 wickets, including four instances of five wickets or more and one instance of ten wickets in a Test match.

# Sehwag and Gambhir were associated in a stand of 77 — India’s first fifty-plus partnership in 12 innings in Tests.

# Sehwag, with one six today, took his sixes’ tally to 89, bettering Brian Lara’s tally of 88. Only Adam Gilchrist (100) and Jacques Kallis (92) have posted more sixes than Sehwag in Tests. (PTI)