Virat Kohli has scored 450 runs in eight innings at an average of 56.25 in Tests this year, including two centuries and two half-centuries - the most by an Indian batsman this year. 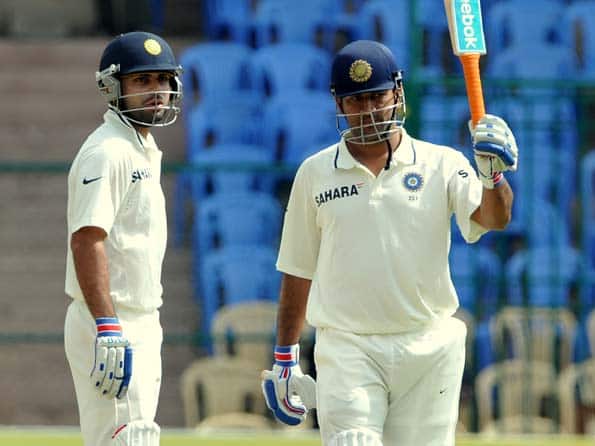 Statistical highlights after day three of the second cricket Test between India and New Zealand.

# Ravichandran Ashwin became the first Indian bowler to record five instances of five wickets or more in an innings in the first eight Tests. His tally includes three instances against New Zealand and two against the West Indies.

# Ashwin (49 wickets at an average of 26.63) requires just one wicket to become the first Indian bowler to complete 50 wickets in eight Tests.

# In the present series, Ashwin has bagged 18 wickets at 13.11 runs apiece. This aggregate is the highest by an Indian bowler in a two-Test series against New Zealand.

# Virat Kohli has scored 450 runs in eight innings at an average of 56.25 in Tests this year, including two centuries and two half-centuries – the most by an Indian batsman this year.

# Kohli’s first century on Indian soil is his second in Tests. His brilliant 103 off 193 balls is his first hundred against New Zealand – his first century in Tests being 116 against Australia at Adelaide in January 2012.

# Kohli and Dhoni were involved in a partnership of 122 – India’s fifth highest sixth-wicket stand against New Zealand.

# For the first time in a Test match against India, eight batsmen got out ‘lbw’.

# Only Martin Crowe (45.36) has a better average than Taylor amongst the twelve New Zealanders with 3,000 runs or more.

# Tim Southee (7/64) produced his best bowling figures in a Test innings. Only once in a Test before the Bangalore game, he had taken five wickets in an innings – 5/55 against England at Napier in March 2008.

# Southee’s excellent bowling feat is the second best by a New Zealand bowler against India, next only to Richard Hadlee’s 7 for 23 at Wellington in 1975-76.

# Apart from Hadlee and Southee, Simon Doull is the only other New Zealand bowler to bag seven wickets in an innings against India – 7 for 65 in the 1998-99 Wellington Test.

# Southee’s this bowling effort is the best by a New Zealander in a Test match on Indian soil, outstripping the 6 for 27 by Dion Nash at Mohali in October 1999.

# Southee’s performance is the sixth best by a New Zealand bowler in Tests, behind the 9 for 52 by Richard Hadlee against Australia at Brisbane in 1985-86. (PTI)