Suresh Raina will miss the first of theIndia vs New Zealand ODIs as he is down with viral fever.

Flamboyant Indian middle-order batsman Suresh Raina will not be available for the first One-Day International (ODI) against New Zealand. India, who have executed a whitewash in the Test series, are all set to face New Zealand for a five-match ODI series but Raina will miss the first of the ODIs as he is down with viral fever. Board of Control for Cricket in India (BCCI) informed about Raina’s illness on Thursday and added that there will be no replacement for the player in the 15-man squad led by India’s limited-overs skipper MS Dhoni as he is expected to be back in action soon. FULL CRICKET SCORECARD: India vs New Zealand, 1st ODI at Dharamsala

“The BCCI Medical team has confirmed that Suresh Raina, who is recovering from a bout of viral fever, is ruled out of the first ODI against New Zealand. There will be no replacement in the team,” a BCCI statement read, as reported by PTI. Raina, who is also the captain of Uttar Pradesh team in the Ranji Trophy, did not bat in the beginner against Madhya Pradesh.

India played exceptionally well in the Test series against New Zealand as the performed well with both bat and ball, clinching comfortable victories against the visitors. Players like Wriddhiman Saha, Cheteshwar Pujara were pivotal behind India’s success while skipper Virat Kohli carried his form into Tests as well, playing a crucial 45-run knock in the second Test and scoring a double hundred in the following match. However, it was because of the spinners, Ravichandran Ashwin and Ravindra Jadeja, who were the most effective. Ashwin was named the Man of the Series for his 27 wickets in the Test series. 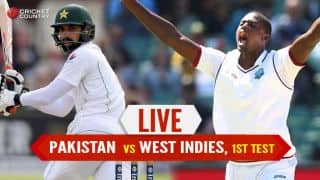