Martin Guptill made 72 off 84 balls before getting out to Hardik Pandya to hand India their second wicket in the fourth ODI at Ranchi.

Martin Guptill narrowly missed out on his fourth century One-Day International (ODI) getting out for 72 runs against India. India and New Zealand are currently engaged in fourth ODI of the five match series at JSCA International Stadium Complex in Ranchi. Guptill helped New Zealand to get off to a steady and quick start. Guptill added 72 runs in 84 ball which included 12 boundaries. Hardik Pandya got the wicket of Guptill who looked good for his fourth ODI century. Guptill looked to drive the ball on the up giving keeper’ Dhoni a simple catch. LIVE CRICKET SCORECARD: India vs New Zealand, 4th ODI at Ranchi

After batting for 15.3 long overs Tom Latham departed making a sturdy 38 runs in a partnership of 96 runs with Guptill. Akshar Patel picked up the key wicket as Latham went for a sweep holding out to Ajinkya Rahane. New Zealand winning the toss, opted to bat first, a decision which was proved right by their openers Guptill and Tom Latham. Guptill in particular was aggressive against Umesh Yadav and Dhaval Kulkarni. Guptill notched up his 18th ODI half-century in 56 -balls with eight four s to his name. India have made one chance as Dhaval Kulkarni has come in for Jasprit Bumrah, with New Zealand making 3 changes. New Zealand have drafted in Ish Sodhi, Anton Devcich and BJ Watling in their playing XI.

At time of publishing this report New Zealand were 157 for 2 with skipper Kane Williamson not-out on 25* and Ross Taylor batting on 10. 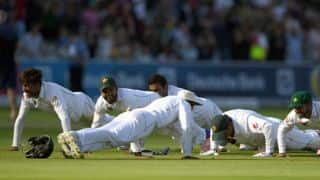 India vs England: James Anderson to be fit for 4th Test?