A little over a year ago, former England captain Tony Greig had called the Eden Gardens "a morgue" after a handful of spectators turned up for a India-West Indies Test. Alas! If only the cricketer had lived a few more days, he would have felt better. A little over a year ago, former England captain Tony Greig had called the Eden Gardens “a morgue” after a handful of spectators turned up for a India-West Indies Test. Alas! If only the cricketer had lived a few more days, he would have felt better.

For less than a week after the demise of the popular commentator, the iconic ground is all set to abuzz with a capacity crowd cheering arch-rivals India and Pakistan in a One- Day International (ODI) Thursday.

The stadium’s custodian Cricket Association of Bengal (CAB) has announced a sell-out crowd.

“All the tickets have been sold out. It will be a sell-out crowd,” CAB treasurer Biswarup Dey told IANS.

With access to the internet perhaps a difficult proposition for ordinary cricket fans, beneficiaries are likely to be the net savvy urban population.

The rest of the tickets were set aside as complimentaries or sold to CAB-affiliated clubs.

The hallowed ground, known for its boisterous and sporting crowd, had been low on the decibel count in the recent past causing concern among many former cricket greats.

The sight of just 1,000 spectators at a stadium with a capacity of 65,000 during an India-West Indies Test in November 2011 had prompted the celebrated Greig to call it a “morgue”.

“Eden Gardens was one of my favourite grounds because of its wonderful atmosphere. Today, it looks and sounds like a morgue,” tweeted Greig, who had happy memories of captaining England to a 10-wicket victory over India at the venue in 1976-77.

The tall cricketer’s own contribution was a 103 that defied a stomach bug and a crumbling pitch.

“I remember when more than 80,000 used to rise on their feet and were roaring. It feels sad to see Eden like this,” Greig had posted on Twitter.

Not only in Tests, the stadium has looked deserted during limited over internationals.

However, the Indian Premier League matches have been an exception with all witnessing good crowd.

The iconic ground witnessed its lowest-ever turn-out in a one day match in October when just 27,000 watching the fifth and final match between India and England.

India’s legendary off-spinner Erapalli Prasanna feels a full house at Eden would be a fitting tribute to Greig who died Dec 29 after suffering a heart attack in Sydney.

“Tony was an excellent cricketer, a good human being. He was one of the shrewdest cricketing brains. I think he deserves this appreciation, such a tribute,” Prasanna told IANS.

As Team India comes to the ground down 0-1 in the series, a packed Eden would expect the hosts to create history by winning their first ODI against Pakistan on this ground and square the three-match series.

India have lost all three ODIs that it played against Pakistan earlier here.

The Eden crowd has always been characterised as passionate and perhaps the most sporting of all in the country.

One of the finest moments in India-Pakistan rivalry happened on this ground Feb 3, 1980, when 85,000 spectators rose to give a standing ovation to visiting captain Asif Iqbal after his final Test innings.

Iqbal, who described playing at Eden as “a schoolboy’s dream come true”, had chosen the iconic ground for his swansong.

The stadium has witnessed some of the historic events of world cricket including the 1987 World Cup final, the inauguration of the 1996 World Cup and its unfinished controversial semi-final between Sri Lanka and India that was awarded to the visitors due to crowd violence.

Again in 1999, the last few balls of an India-Pakistan Test had to be played before vacant galleries after police emptied the stands following unruly scenes.

However, Prasanna finds the grandeur and elegance of the stadium intoxicating. “It’s real beauty lies in the heart of its spectators. Eden has the ambience, the atmosphere.

“And I feel Test cricket will really bounce back to life the day it attracts a capacity crowd at Eden. And this is going to happen in the very near future, may be in an India-Pakistan match.” 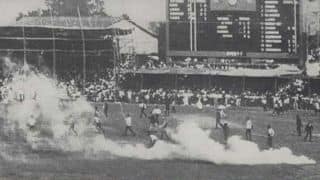