India are at 118 for four after 26 overs against Pakistan in the sixth match of the Asia Cup 2014 at Mirpur. Ambati Rayudu is batting on 16 and Dinesh Karthik is on three. India have lost all their top four batsmen.

Shikhar Dhawan was the first wicket to fall for 10 to Mohammad Hafeez. Virat Kohli then departed for five to Umar Gul. Rohit Sharma has top-scored so far with 56, but he fell to Mohammad Talha. Ajinkya Rahane then was dismissed for 23 as Talha got his second wicket.

Pakistan captain Misbah-ul-Haq won the toss and elected to bowl first. Both India and Pakistan have won one and lost one in the Asia Cup. 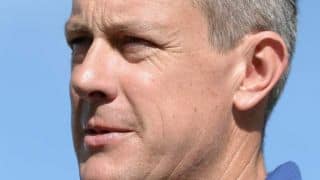