The statistics were announced by the search engine giant on Wednesday at Guwahati.

According to the global search engine, more than 10,00,000 search queries were made from across the country on Google Search for the February 15 match in which India defeated Pakistan by 76 runs.

“During the match, live cricket score and related queries reached a level that it even surpassed the 10,00,000 mark positioning it on the top among trending search queries in India on the day of the legendary clash,” Google said in a statement at Guwahati. ICC Cricket World Cup 2015: SCHEDULE & MATCH DETAILS

After India’s victory, everyone — from the political class to Bollywood stars — wished the team as queries around ‘Men in Blue’ emerged as the top trending of the day. Top 10 batsmen in ICC Cricket World Cup 2015

Besides, it said, over 1,00,000 search queries were made on the Pakistan team that day.

The analysis of the online trends found that over 5,00,000 search queries were generated from India when the biggest cricket tournament kicked off on February 14. Top 10 bowlers in ICC Cricket World Cup 2015

While Pakistan was searched the most on the World Cup, it was closely followed by Bangladesh, Sri Lanka, Nepal and India. Hosts New Zealand, which was at sixth position, was followed by Qatar, United Arab Emirates (UAE) and Afghanistan. Top 10 fielders in ICC Cricket World Cup 2015

Afghanistan’s debut at the Cup also saw wide interest from India with over 50,000 queries for it on February 18.

India’s massive win against South Africa also pushed the search queries to over 5,00,000 on match day. 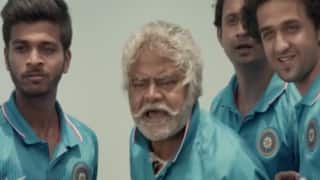