India won the coin toss and elected to bowl against Pakistan, in Super 10 Group 2, Match 19 of the ongoing ICC World T20 2016 at Kolkata.

India won the coin toss and elected to bowl first against arch-rivals Pakistan, in Super 10 Group 2, Match 19 of the ongoing ICC World T20 2016 at the historic Eden Gardens Stadium in Kolkata on Saturday. The decision was a fair one from Dhoni as the conditions are overcast with the pitches being a little moist after having stayed under the covers, while he stuck to an unchanged squad from the loss to New Zealand. Afridi, on the other hand, made a change in the form of Mohammad Sami, who replaces Imad Wasim. Owing to the steady rain and delayed start, the game has been reduced to 18 overs per side. LIVE CRICKET SCORECARD: India vs Pakistan, Group B Match 19 of ICC T20 World Cup at Eden Gardens 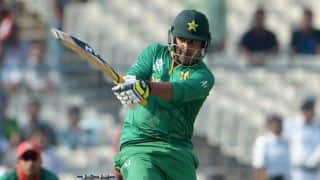