Pakistan Under 19 batsmen Rohail Nazir-Qasim Akram were involved in a hilarious runout on Tuesday during the high-octane semi-final 1 against India at Potchefstroom. Pakistan Under 19 batsmen Rohail Nazir-Qasim Akram were involved in a hilarious runout on Tuesday during the high-octane semi-final 1 against India at Potchefstroom. The incident took place in the 31st over of the match when Akram looked to drop and run.

Unfortunately, non-striker Nazir initially took off but later realised there was no run in it and turned back midway which meant both the batsmen ended up on the same end as Atharva Ankolekar, picked up the ball and threw it to wicketkeeper Dhruv Jurel, who had ample time to whip off the bails.

It was a hilarious end to Qasim’s knock as he was left embarrassed.

Here is the video of the runout:

Meanwhile, Indian bowlers produced a brilliant performance under pressure to dismiss Pakistan for 172.

Pacer Kartik Tyagi (2/32 in 8 overs) bowled yorkers at will while leg-spinner Ravi Bishnoi (2/46 in 10 overs) was a difficult proposition to read for the Pakistani batsmen.

Pakistan skipper Rohail Nazir (62 off 102 balls) and opener Haider Ali (56 off 77 balls) were the only ones to make a significant contribution as the innings lasted 43.1 overs.

At the time of filing the copy, the Indian chase was underway and they were going strong at 122 for no loss after 28.3 overs. Yashaswi Jaiswal was on 72* off 92 balls and Saxena was on 47* off 80 balls. 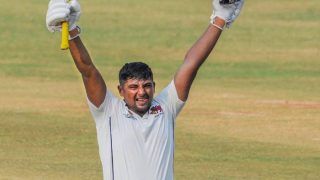