The much-awaited and hyped high-profile encounter between the arch-rivals India and Pakistan, has now been shifted to Kolkata.

The much-awaited and hyped high-profile encounter between the arch-rivals India and Pakistan, that was slated to be held at the Himachal Pradesh Cricket Association (HPCA) Stadium in Dharamsala, has now been shifted to the historic Eden Gardens Stadium in Kolkata, the ICC officially confirmed on their website. The tie of the Super 10 stage of the ICC World T20 2016, will be played at the venue at the scheduled time of 7.30 pm. “The decision has been taken following consultation with the BCCI, the relevant state associations, the ICC and BCCI security consultant and other relevant authorities. The decision to relocate the match has been made for security reasons.” said Dave Richardson, ICC Chief Executive. FULL CRICKET SCORECARD: India vs Pakistan, ICC World T20 2o16, Match 19 at Kolkata

The concerns initially arose following alleged public comments recently reported by the Chief Minister of Hamachal Pradesh, warning of demonstration and attempts to disrupt the peaceful conduct of the match. Our concerns relate both to uncertainty as to the level of those threats as well as the level of commitment to implement any security plan developed to mitigate such treats,” he added. India vs Pakistan, ICC Twenty20 World Cup: Pakistan government against match at Dharamsala

“The decision was not taken lightly. The ICC and the BCCI understand the disappointment that is likely to be felt by many over the decision to move the match. But the safety and security of the event is of paramount importance to the ICC and we have taken into consideration the concerns shared with us by our security advisors as well as Pakistan Cricket Board,” added Richardson again.

“As far as those who have purchased tickets online for the match, they will be offered the choice of a full refund or the opportunity to exchange their tickets for ones for the Kolkata match. Finally, I would like to confirm that the ICC has been assured by all relevant state authorities that all adequate security measure are in place and will be implemented to ensure that the event is staged in a safe and secure environment for all stakeholders,” he concluded. 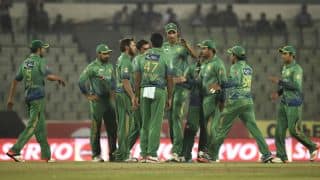