Vijai Singh Mantokia added it's a question of sentiments of the soldiers, the families of martyrs, war veterans and ex-servicemen.

Shimla: A day after Chief Minister Virbhadra Singh advised Indian cricket board secretary Anurag Thakur to sort out the issue of  ICC World Twenty20 2016 India vs Pakistan match slated at Dharamsala with the agitating families of martyred soldiers, ex-servicemen league’s state chief Vijai Singh Mankotia on Thursday refused to relent. “The terror and T20 cannot go together. There is no give and take in this issue. It’s a question of sentiments of the soldiers, the families of martyrs, war veterans, ex-servicemen,” the former Congress minister told reporters here. Mankotia, now chairman of the Himachal State Tourism Development Board, categorically said it would be a ‘do or die battle’ and ex-servicemen would not let the match happen. Live Cricket Scorecard: India vs UAE, Asia Cup T20 2016 Match 9 at Dhaka

He said he had a talk with the chief minister after Thakur met him on Wednesday. “Sentiments are flared up. The venue of the match should be shifted. We are meeting on March 10 over the issue again,” he said. Mankotia said the BCCI secretary’s allegation that the sports were being given political colour was ridiculous. “Politics is there in BCCI. That is why Justice Lodha Committee has said that the BCCI should be taken out of the clutches of politics and politicians,” he added. Mankotia said the BCCI had been sending emissaries to the families of martyrs and it was actually an insult to them when they were offered money out of income from the match. India vs Pakistan, ICC World T20 2016 match at Dharamsala will be played as per schedule: Anurag Thakur

“The BCCI is playing with the sentiments of the families of the martyrs and ex-servicemen,” he added. Himachal Pradesh leaders from both the ruling Congress and the opposition Bharatiya Janata Party (BJP) are united in their opposition to the Super 10 Group 2 match between India and Pakistan being hosted at Dharamsala on March 19, keeping in mind the local sentiments against Pakistan. “I will go to any extent to request anyone with folded hands in the interest of Himachal Pradesh,” Thakur said here on Wednesday, seemingly making it an issue between him and others. He called upon all stakeholders to rise above “petty politics” in the interest of the nation and not to oppose the match at Dharamsala.

While Chief Minister Virbhadra Singh has in a letter to union Home Minister Rajnath Singh asserted that the state government will not be able to provide security during the game when anti-Pakistan sentiments have flared up, former chief minister and BJP leader Shanta Kumar in his letter to Prime Minister Narendra Modi said the match should not be allowed at Dharamsala in Kangra district as it is home to hundreds of valiant jawans, martyrs and ex-servicemen. After meeting Thakur, Virbhadra Singh reiterated his concern over “security”. 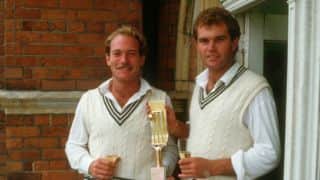