Shahryar Khan said cricket can serve as a bridge between India and Pakistan.

Kolkata: Lamenting that politics was getting mixed up with sports, PCB chairman Shahryar Khan on Saturday batted for the revival of India–Pakistan bilateral cricketing ties, contending that the game can play an important part in improving cross-border relations. In the city to watch Saturday’s high-octane World Twenty20 Cup group tie at the Eden Gardens, Khan praised the ‘very fair’ Kolkata crowd and said an India-Pakistan clash holds significance for the entire world and not just the two countries alone. Live Cricket Scorecard: India vs Pakistan, ICC World T20 2016, Match 19 at Eden Gardens

“It’s unfortunate that politics gets mixed up with sports, they are different entities and should not be mixed.  I am hopeful of the bilateral series being revived. In fact, during my meet with [Board of Control for Cricket in India president] Shashank Manohar, he assured me of India’s desire to play bilateral series but said only condition was the government giving permission. The unfortunate fact is the government permission has not been given. But we are hopeful,” the Pakistan Cricket Board (PCB) chief said. READ: Shahryar Khan finds no security threat to Pakistan in India during ICC T20 World Cup 2016

“An India-Pakistan match is not just significant for the two countries but for the entire world. Such a match affords the opportunity for people to people contact, people from both the countries get to meet each other, a cordial environment is created, so I feel, if both the governments want relations to move forward, it should be done through cricket,” said Khan who in the recent past had made several attempts to get the bilateral series back on track. Owing to diplomatic tension, the arch-rivals have not played any bilateral series for more than three years and the cricketing battles are restricted to multinational tournaments. India vs Pakistan, T20 World Cup 2016: Pakistan’s National Anthem to be sung by Shafqat Amanat Ali

Talking about Saturday’s crucial tie, Khan exuded confidence that his boys will do well, and pointed out that the Eden Gardens is a favourite hunting ground for the Pakistanis. Calling Indian star Virat Kohli an outstanding batsman, Khan said the match was a clash between Pakistani bowling and Indian batting. “No matter who wins the match, what we want is that it should be established that the people from both the countries want the India-Pakistan matches to happen and politics should not come in between sports. I think cricket can be a bridge between the two countries,” Khan added. 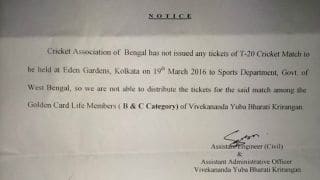