PM Modi congratulates India on their 11th consecutive win in the World Cup over Pakistan at Eden Gardens, Kolkata.

New Delhi: Prime Minister Narendra Modi congratulated team India for an “amazing” victory against Pakistan in the T-20 World Cup match played in Kolkata. “Congratulations Team India for the amazing victory. #IndvsPak,” the Prime Minister tweeted. India today defeated arch-rivals Pakistan by six wickets riding on Virat Kohli’s classy unbeaten 55. In a low scoring rain-curtailed showdown, the hosts restricted Pakistan to 118 for five and then overhauled the target in 15.5 overs on a viciously turning track at the Eden Gardens. Virat Kohli bowed down to show his gratitude to legend Sachin Tendulkar who was cheering for the team all game long along side veteran actor Amitabh Bachchan showing his passion for the game at this age. FULL CRICKET SCORECARD: India vs Pakistan, Group B Match 19 of ICC T20 World Cup at Eden Gardens

Here are some statistical facts about the game:

# Including the bowl-out victory after the match had tied at Durban in 2007, India have won 7 out of eight matches played against Pakistan in T20Is – winning per centage 81.25.

# India could not capture a single wicket in the first six overs for the first time in 10 T20Is. In their previous nine consecutive matches, they had taken atleast two wickets.

# Shoaib Malik and Umar Amal have amassed 780 runs in partnerships at an average of 37.14 in 23 innings – the most by a Pakistani pair in T20Is.

# Rohit is still averaging 150.33 in international cricket at Eden Gardens, Kolkata – his aggregate being 451 in three innings.

# Suresh Raina’s first duck vs Pakistan is his second in T20Is. He had recorded his first duck seven years ago vs New Zealand at Wellington on February 27, 2009.

# Kohli, with eight Man of the Match awards, has set an Indian record for most MOM awards, bettering Yuvraj Singh’s tally of seven such awards. Sachin Tendulkar and Kohli are the only two batsmen to have got three MOM awards each against Pakistan in eleven World Cup and World T20 matches. Navjot Singh Sidhu, Amit Mishra, Venkatesh Prasad and Irfan Pathan have got one each.

# Kohli’s record vs Pakistan is excellent in T20Is – his tally being 254 in six innings at an average of 84.66. No other batsman has managed even 170 runs in T20Is involving India and Pakistan.

# Virat Kohli has posted eleven fifties in a winning cause in T20Is. Just one batsman has more fifty-plus innings in a winning cause – 12 (a hundred and eleven fifties) by Brendon McCullum. Kohli’s superb tally of 14 fifty-plus innings overall is exceeded only by two batsmen – 15 each by Chris Gayle and Brendon McCullum. Sri Lankan, Tillakaratne Dilshan has also 14 fifties to his credit.

# Kohli and Yuvraj Singh were involved in a match-winning partnership of 61 for the fourth wicket – the sixth between the pair, setting an Indian record in T20Is, surpassing the five each by two pairs – Dhoni and Yuvraj and Rohit Sharma and Kohli.

# Of the nine partnerships of fifty-plus for the fourth wicket for India in T20Is, four are against Pakistan. India’s highest partnership for his wicket-position is 97 between MS Dhoni and Yuvraj Singh vs Pakistan at Ahmedabad on December 28, 2012.

# Kohli-Yuvraj pair has managed 557 runs in 14 innings at an average of 42.84. Their average is the second highest by a Indian pair (minimum 300 runs) next only to the 44.28 by Rohit sharma-Virat Kohli pair. 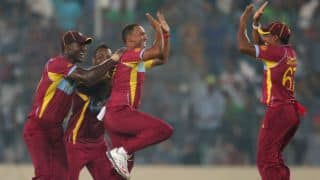