The India-Pakistan surface has provided a lot of support for the spin-bowlers.

India and Pakistan, the perennial arch-rivals are engaged in a high-intensity game at Kolkata’s Eden Park, setting the T20 World Cup 2016 alight with excitement. The pitch has once again provided for a lot of turn. Ravindra Jadeja and Ravichandran Ashwin turned the ball square. Jadeja is not usually associated with getting a whole deal of turn, but he was continuously deceiving batsmen with sharp turn. As usual there have been plenty of reactions to the copious amount of spin on offer. Cricketers and fans alike have made their comments pertaining to the pitch public. Comments have ranged from criticism, comedy, neutral observations to positive comments. LIVE CRICKET SCORECARD: India vs Pakistan, Group B Match 19 of ICC T20 World Cup at Eden Gardens

The usual suspects like Glenn Maxwell have made comments on Twitter. Maxwell made a comment to the effect that it is close to impossible to score runs on surfaces of this nature. Sambit Bal, a popular cricket expert, went to the extent of calling the surface diabolical. Ravi Bopara was in praise of the surface or so it seemed. Irish cricketer, Niall O’Brien, reckoned the pitch does not make for good viewing.

Moeen Ali commented that the pitch is difficult to bat on, but was more interested in the India-Pakistan rivalry, rather than delving on nature of the surface. Aakash Chopra came out in praise of New Zealand in regards of their ability to read the surface to the tea and fielding an attack in accordance, while remarking about how India and Pakistan had both missed a trick; India by not playing Harbhajan Singh and Pakistan by dropping spinner Imad Wasim for an extra seamer in Mohammad Sami.

Brilliant pitch. It is exciting to see the ball rag. 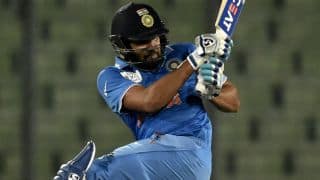