Here's a look at the memorable bowling moments between these two teams at the World Cups so far.

It’s time folks. India and Pakistan are ready to add another chapter to their storied on-field rivalry. A full house Old Trafford in Manchester is expected to greet the cricketers of these two cricketing powerhouses on Sunday. However, when it comes to World Cup, it has been a one-way traffic between these two teams. India have emerged victorious on all six occasions when these two sides have met. Will Sunday be India’s seventh? Or will Pakistan finally end their World Cup jinx?

As we wait with bated breath for the contest, here’s a look at the memorable bowling moments between these two teams at the World Cups so far.

After India set Pakistan 217, Aamer Sohail led the chase with a typically enterprising innings. Though Pakistan lost Inzamam-ul-Haq – then quite young and rather fit – and Zahid Fazal early, Sohail and Javed Miandad kept the runs coming. The turning point of the match came when Sachin Tendulkar, bowling his dibbly-dobbly medium-pace, bowled a full toss to Sohail that was caught by Kris Srikkanth. Sohail was out for 62, and none of the other batsmen could get going.

Aamer Sohail and Venkatesh Prasad were involved in what might be the most memorable confrontation between two players in a World Cup match. Chasing India s 288, Sohail and Saeed Anwar got Pakistan off to a flying start. Anwar was out for a blazing 48, but Sohail was still going strong. By the 15th over, Pakistan were cruising at 109 for one. Sohail missed one from Prasad before stepping down the track and slashing a good delivery for four through point. He then gestured toward Prasad to show him the direction the ball had gone in. Prasad responded in remarkable fashion by bowling Sohail off the very next ball. He then proceeded to show Sohail the way back to the pavilion.

Venkatesh Prasad continued from where he left off against Pakistan in the 1996 World Cup, when he run through the Pakistani middle order, snaring five for 27. Chasing 228, Pakistan were on the back foot early, with Shahid Afridi and Ijaz Ahmed falling to Javagal Srinath. Prasad then got into the action, getting rid of the top three run-scorers of the innings: Saeed Anwar, Moin Khan, and Inzamam-ul-Haq. He also took the wickets of Saleem Malik Wasim Akram for good measure.

The 2003 World Cup was a rather strange one for Sourav Ganguly. He scored three centuries two against Kenya and one against Namibia but failed to get more than 48 in the other matches. After Pakistan set India a challenging 274, the Indian captain would have been expected to make a contribution.

However, that was not to be. After Virender Sehwag and Sachin Tendulkar got India off to a flier, Waqar accounted for Sehwag and Ganguly off successive deliveries, turning the tide at least temporarily in Pakistan s favour.

Only one century has been scored in India-Pakistan World Cup matches. Saeed Anwar is the man to hold that honour, but there was a very real chance that the statistic would change in that same match. Tendulkar s innings in the 2003 World Cup is well-documented. His upper cut off Shoaib Akhtar is now the stuff of legend. But it was the same bowler who ended Tendulkar s terrific knock, getting the master blaster out for 98. Tendulkar never had the satisfaction of scoring a World Cup century against Pakistan, and Shoaib had the last laugh in that match.

Sachin Tendulkar being dropped four times in an innings is nigh unfathomable, but Pakistan managed to out-do themselves when they did just that in the semi-final of the 2011 World Cup. However, before he was dropped even once, Tendulkar was adjudged LBW to Saeed Ajmal. Tendulkar, batting on 23, was struck in front of the stumps off Ajmal in the 11th over of the innings. Umpire Ian Gould raised the finger, but Tendulkar chose to review the decision. Replays suggested that the ball would have missed the leg stump, and the decision was overruled. Tendulkar was nearly stumped off the next ball, and went on to enjoy four more chances after that!

2011: Wahab gets Yuvraj for a first-ball duck

If Tendulkar getting as many as six chances was nothing short of a miracle for India, then Wahab Riaz clean bowling Man of the Tournament Yuvraj Singh for a first-ball duck was the same for Pakistan. Virat Kohli s dismissal for nine had reduced India to 141 for three, in dire need of a strong partnership.

In walked Yuvraj Singh, who had scored one hundred and four fifties in the last seven games. Wahab Riaz, who eventually ended with five wickets, speared in an unplayable swinging yorker that crashed into the middle and leg stumps as Yuvraj was cleaned up first ball.

By the time India played the 2011 World Cup, Harbhajan Singh was on the decline. He remained a part of India s set-up, but he was no longer the obvious first-choice spinner. In the semi-final against Pakistan though, Harbhajan showed signs of his old brilliance. He kept things tight, gave the ball some air, and managed to cause all sorts of problems to the Pakistan batsmen. Umar Akmal was perhaps one of the most fluent Pakistani batsmen on the day, scoring 29 off 24 balls and looking like he would run away with the match till Harbhajan produced a beautiful arm ball that beat him all ends up took out the off stump. After that, he got rid of Shahid Afridi for a 17-ball 19 as India all but sealed the match.

Chasing 301, Pakistan had lost five wickets at Adelaide Oval inside 25 overs. However, in captain Misbah-ul-Haq and big-hitting Shahid Afridi, they still had hopes. The duo had 46 runs between them and it looked, Pakistan were slowly clawing their way back. Then, Mohammed Shami delivered a full toss and Afridi, who was batting on 22 off 21, went after it, ended up getting an outside edge. Virat Kohli, who had starred with a century earlier in the match, took a good catch to send Afridi packing. In the same over, Shami had Wahab Riaz out caught behind and went on to finish with figures of 4/35 as India continued their world cup dominance over Pakistan. 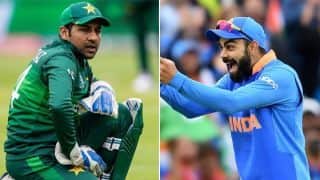