The clash between India and Pakistan in the World Cup semi-finals will showcase one of the world's most intense sporting rivalries fuelled by nationalism, bloodshed and a shared history. 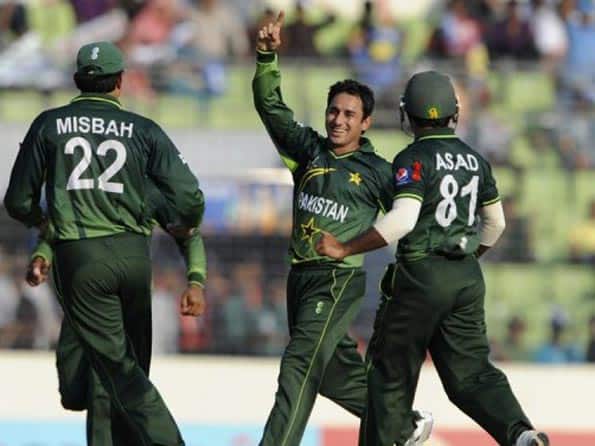 Pakistan bowler Saeed Ajmal (C) along with the teammate celebrate the dismissal of West Indies batsman Devendra Bishoo during their 2011 Cricket World Cup quarter-final match at the Sher-e Bangla National Stadium in Dhaka, on March 23. Pakistan face India next, in Wednesday’s semi-final clash in Mohali.

The clash between India and Pakistan in the World Cup semi-finals will showcase one of the world’s most intense sporting rivalries fuelled by nationalism, bloodshed and a shared history.

The two countries have had a fraught relationship since Pakistan was carved out of India to establish a Muslim homeland when British rule of the sub-continent ended in 1947. They have fought two wars over the disputed region of Kashmir, another over the creation of Bangladesh, and they last came to the brink of warfare as recently as 2002.

On the cricket field, a knock-out World Cup match on Indian soil is the biggest fixture between the two rivals for decades, and the excitement across the region is already sky-high ahead of Wednesday’s clash in Mohali. After Thursday’s victory over defending champions Australia, India captain Mahendra Singh Dhoni said Pakistan were the ultimate opponents.

“India v Pakistan in the semi-finals — it doesn’t get better,” he said. “A World Cup hosted by the sub-continental nations and India and Pakistan making it to the semis.” Pakistan coach Waqar Younis said that “there is no bigger rivalry in the game”, while captain Shahid Afridi even expressed hope that a Pakistan-India match “could improve relations”.

The two countries had broken off cricket ties — except for a couple of volatile Test matches in India — for 15 years before India’s historic tour of Pakistan in 2004. Fierce competitiveness, even hatred, is evident whenever India and Pakistan play, but recent games have also been marked by a sense of cross-border comradeship.

The conflicting emotions reflect the complex state of relations, which are often compared to those within an estranged family. Pakistani flags have occasionally been raised in the Muslim slums of Hindu-majority India during games — causing predictable outrage. More strikingly though, the matches in 2004 when the India side returned to Pakistan prompted an outburst of affection.

Thousands of Indians were granted special visas to attend the fixtures, and many said that they had been greeted like long-lost brothers as taxi-drivers gave them free lifts and hotels refused to charge them for rooms.

At the first game of the tour, in Karachi, the local crowd cheered both sides and even gave a standing ovation when India won by just five runs. The contrast between political and sporting links was again on display at the Commonwealth Games in New Delhi last year, when many outsiders were surprised to hear the Pakistan team given a huge cheer at the opening ceremony. Few Pakistanis are expected to make it to the stadium in Mohali, but many millions of fans in both countries will follow the game avidly on the television.
Every Indian newspaper front-page on Friday set the tone for the coming days.

“Bring on Pakistan!” screamed the Mail Today. “Pakistan next test of nerves for India,” said the Hindustan Times. Whether cricket can help the two nuclear-armed nations to narrow their differences is uncertain, particularly as Pakistan struggles with militant suicide attacks, political assassinations and a collapsing economy. Diplomatic tensions have remained high since Pakistan-based Islamist militants attacked Mumbai in 2008 killing 166 people — though the two countries’ foreign ministers are due to hold talks in Delhi in July.

Fears of another attack will mean a massive security presence in Mohali, and the Times of India summed up how the prospect of the game triggered excitement tinged with apprehension. “It’s a match fans, organisers and advertisers have been fantasizing about, and the fact that it will be Pakistan’s first on Indian soil since 26/11 (the Mumbai attacks) lends an extra edge,” it said. “Fasten your seat belts.”