India chasing history came out all guns blazing in the first ODI against South Africa. Still winless at Durban against Proteas, it was India s spin twins Kuldeep Yadav and Yuzvendra Chahal that rocked hosts batting order claiming 5 wickets between them. For the home side, Faf du Plessis remained rock-solid despite a batting collapse. His hundred enabled South Africa to reach a competitive total of 269 for 8.

Electing to bat on a belter of a surface, Hashim Amla and Quinton de Kock came out to open for the hosts. With no help for Bhuvneshwar Kumar and Jasprit Bumrah from the pitch, the pair eased themselves in the middle and added 30 runs in first seven overs. India had a minor scare, after Virat Kohli was seen taking treatment on his left knee, after a slide going wrong.

Bumrah came back strongly and devoured the blossoming stand to get rid of Amla for 14.

Skipper du Plessis joined de Kock and struck boundaries instantly to release any pressure the Indians had built. It was easy picking for du Plessis and de Kock once Hardik Pandya and Chahal were introduced after Powerplay 1.

Pandya continued to leak runs, including 18 in this third. De Kock and du Plessis added 50 runs in 41 balls, before the former fell for 34 in a bid to flick Chahal on the leg-side. De Kock walked off after being judged leg before. Replays showed the ball was missing stumps and therefore, a review could have saved him

Aiden Markram, replacing AB de Villiers,came to the crease. India too introduced Kuldeep Yadav, much to the worry of Markram, who struggled to read him. Chahal eventually picked Markam after the latter struggled to a 21-ball 9. JP Duminy along with du Plessis kept the scoreboard ticking. Kuldeep cut Duminy s stay short, cleaning him for 12.

Amidst all this, du Plessis recorded his half-century off 54-balls. Kuldeep continued his wizardry getting rid of David Miller for 7. Kohli taking a neat catch at short cover.

Du Plessis and Chris Morris began the repair work. With South Africa on the back foot, Kohli recalled Hardik Pandya, who looked like a man on a mission, revving up his pace quite a bit.

Post Kuldeep and Chahal’s spell, Morris made is intent clear. He started to up the ante with boundaries off Bhuvneshwar and Bumrah. Morris and du Plessis soon cooked up a 50-run stand in 57 deliveries.

Kuldeep came into the attack and claimed Morris with almost a full-toss. Despite being lofted for a six in the same over, Kuldeep tossed the ball up much to India’s delight. Morris missed the ball and got his stumps rattled for a delightful 37. He finished with his best ever ODI figures, 10-0-34-3.

Du Plessis reached his ninth ODI hundred in 101 balls, that included 11 fours; his second against India. He was well supported by Andile Phelukwayo.

After his hundred, du Plessis opened his arms, and took the aerial route more often. Du Plessis and Phelukwayo notched up a 50-run stand in 48-ball with the latter contributing 20 runs.

Bhuveshwar picked du Plessis for 120 in the final over of South African innings. Phelukwayo was joined by Kagiso Rabada. Rabada was run out by Dhoni for 1.

Proteas closed their innings on 269 for 8 with Phelukwayo and Morne Morkel unbeaten on 27* and 0 respectively.

South Africa won the toss, and did not hesitate to bat first. India pulled off a surprise by adding Rahane to the side. Earlier, the team management had cleared that Rahane was only a back-up opener. He warmed the benches against New Zealand and Sri Lanka. 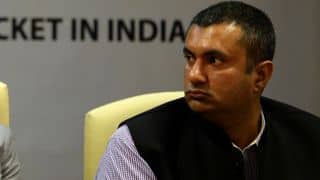