India have never won an ODI at Durban against South Africa.

Focus shifts from Tests to a faster-paced format, as India and South Africa gear up for six-One-Day International (ODI) series. This series holds great significance for both sides, as the outcome will reflect on ICC ODI Team Rankings; a 4-2 finish in India s favour will see visitor’s snatch No.1 Rankings away from South Africa. Having said so, India have never won a series in South Africa.

AB de Villiers unavailability for the first three games due to a finger injury is a setback for the hosts but they have firepower aplenty.

India s ODI record against hosts in South Africa is unspeakable; winning 5 out of 28 ODIs (26 defeats). This tally decreases to zero wins in 6 ODIs at Durban. Though India have fond memories of winning against England here in the 2003 World Cup and of course, for registering the famous Test win in 2010-11. Pitch is expected to be slow in parts, with rain around and a heavy layer of brown grass seen a day before play.

Virat Kohli will be eager to introduce some fresh legs in the side, with players like Shreyas Iyer, Manish Pandey, Kedar Jadhav and MS Dhoni back in the fray. This will be Kohli s first ODI series after New Zealand, making free slots in the playing XI more difficult. Jadhav might find a permanent place in the side, given his bowling capabilities. Either one between Pandey, Iyer and Ajinkya Rahane will play.

India have added Shardul Thakur to its mix, an addition that will relief pressure from Shami. Thakur is expected to generate pace and bounce from the South African tracks.

India will bank on Yuzvendra Chahal s guile to work magic at Durban. Kuldeep Yadav might have an outside chance to feature, given South Africa s lower-order’s dependence on JP Duminy and David Miller.

South Africa, on the hand, is likely to hand Khayelihle Zondo a debut, in place of de Villiers. Zondo has been in scoring form playing for Dolphins in domestic cricket. Hashim Amla, Quinton de Kock and du Plessis form a terrifying trio at the top, with Duminy and Miller waiting in the wings down the order.

Going by the conditions at Durban, Imran Tahir will form a one-man spin attack for the Faf du Plessis-led Proteas with Duminy chipping in a few overs.

South Africa s pace battery has a problem of plenty, but they will rely on the tried and tested quadruple of Morne Morkel, Chris Morris, Lungi Ngidi and Kagiso Rabada to trouble Indian batsmen. 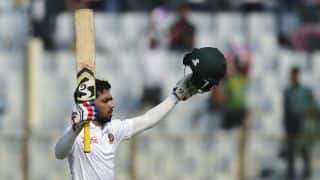