BCCI will launch a specially-minted toss coin with the images of the Father of the Nation and Nelson Mandela.

New Delhi: Commemorating Mahatma Gandhi’s 146th birth anniversary, the Board of Control for Cricket in India (BCCI) will launch a specially-minted toss coin with the images of the Father of the Nation and Nelson Mandela for the India-South Africa cricket series starting on Friday at Dharamasala. “The toss coin in gold features an impression of Mahatma Gandhi and Nelson Mandela as ‘Heads’ and the Freedom Series as ‘Tails’,” the BCCI said in a statement. Designed exclusively for the Freedom Series, the 20 grams gold-plated sterling silver coin will be used by India and South Africa for all the formats of the game played with each other in India or South Africa for perpetuity. India vs South Africa 2015 1st T20I at Dharamsala, Preview: India aim to stamp authority right from the start

The coin has the photographs of Mahatma Gandhi and Nelson Mandela laser engraved on it and will be launched by BCCI Secretary Anurag Thakur along with the two captains, MS Dhoni and Faf du Plessis, at the start of the first T20I match at Dharamsala on Friday night. VVS Laxman: India-South Africa T20I series can be a mouth-watering prospect

“This is our small way to pay homage to Gandhi ji as we celebrate his 146th birth anniversary. Mahatma Gandhi and Nelson Mandela proved to the world that freedom could be achieved through the path of non-violence – a true symbol of peace, truth and harmony,” Thakur said. “This coin will keep reminding everyone about the teachings of both the great leaders and also the strong bond India and South Africa share historically.” MS Dhoni vs Faf du Plessis: A comparison of two captains

India’s limited overs captain Mahendra Singh Dhoni on Thursday said that the search is still on for a potent cricketer, who can fit into the role of a seam bowling all-rounder that will help getting the team combination right. Dhoni spoke in the context of team’s bowling combination which hinges on whether they have a quality seamer all-rounder. “We have four spinners (Ravi Ashwin, Harbhajan Singh, Amit Mishra and Axar Patel) and three proper seamers (Mohit Sharma, Bhuvneshwar Kumar and Sreenath Aravind) and a seamer all-rounder (Stuart Binny),” Dhoni said at the pre-match conference. 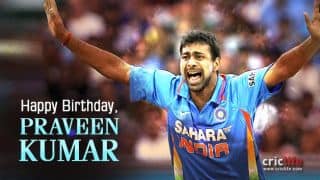