Full details of how you can watch and follow LIVE action of the 1st Test between India and South Africa at Visakhapatnam on Wednesday.

India already announced their playing XI on the eve before the match. While captain Virat Kohli confirmed Rohit will open alongside Mayank Agarwal, notable exclusion came in Rishabh Pant, one who has been pitted as MS Dhoni’s successor, who was dropped with senior wicketkeeper Wriddhiman Saha reclaiming his position back in the side.

Rohit failed to demonstrate his credentials in the build-up to the match when he was bowled for a two-ball duck in South Africa’s sole warm-up game before the series. However, that should not deter his confidence and with KL Rahul dropped due to lack of runs, Rohit opening the innings could be a blessing in disguise for India which could also give the think-tank a settled opening pair.

The series will also be an important one for Ravichandran Ashwin, who lost his position as the primary overseas spinner. Conditions favourable for spinners will give the Tamil Nadu tweaker added motivation to perform. Hanuma Vihari, who also been included in the playing XI, will be the third spinning option along with Ravindra Jadeja. (FULL PREVIEW)

You can also follow LIVE streaming of the match on CricketCountry (India vs South Africa 1st Test: Scorecard) 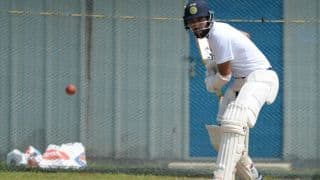