The Indian cricket team currently leads 1-0 after emphatic win in the first bout of the Gandhi-Mandela Series 2015.

After handing out a 108-run thrashing in the first Test to the world No. 1 ranked Test team, South Africa, the Indian cricket team — led by their spinners — would aim to maintain similar performance in the second Test beginning Saturday. India currently leads the series 1-0 after an emphatic win in the first bout of the Gandhi-Mandela Series 2015, and are expected to continue making merry on pitches that will most probably be conducive for spin bowling. The pitch at the M Chinnaswamy Stadium in Bengaluru has favoured the batsmen traditionally, but it can be presumed that it will be somewhat similar to the one that was witnessed at Mohali for the firs Test.  FULL CRICKET SCORECARD: India vs South Africa 2nd Test at Bengaluru

The Indian cricket team produced a dominant show in the first Test, but there are areas of concern for both teams going further into this four-Test series. The form of their opening batsman Shikhar Dhawan is a concern to start with, as the left-hander bagged a pair at Mohali. Virat Kohli also has not been getting the runs that he would have liked, and with two out of their five preferred specialist batsmen struggling, India needs to revise their plans going into the second Test.

The idea of five bowlers looks enticing on pitches that provide both turn and bounce, but with the Indian pitches supporting only the spinners, the presence of second seamer in the playing XI becomes almost redundant. India would be served well if they include an additional batsman who can bowl as well — for instance Rohit Sharma or Gurkeerat Singh — who can not only provide support with part-time spin, but can also plunder runs at any position in the line-up. READ: India vs South Africa, Mohali: Was the pitch really poor, or ‘doctored’?

Neither India nor South Africa are likely to make major changes, apart from the forced ones. Vernon Philander’s series was over when he got injured during a football match in one of the training sessions, and there is not much clarity over the availability of the other pacers Morne Morkel and Dale Steyn. In place of Philander, South Africa have summoned Kyle Abbott. Steyn did not bowl in the second innings of the first Test, and there is no update yet on his availability.

JP Duminy has been declared fit, and his presence would give South Africa one more spin option apart from the three that they have in Imran Tahir, Simon Harmer, and opening batsman Dean Elgar. The South Africans would be tempted to shift focus on the slow bowlers instead of decking up their bowling attack with three pacers, who might not give them the desired results. READ: Should Shikhar Dhawan make way for Rohit Sharma or KL Rahul?

The real battle will once again be between the South African batsmen and the Indian spinners, who would once again test the skills and temperament of the touring batsmen. South Africa showed frailties in their mind and skills at Mohali, and the Indians were quick to capitalise on that. The tourists would surely have done some hard work on this front, but the challenge that Indian spinners pose is not an easy one to decipher.

It will be important for South Africa to make a comeback after the thrashing in the first Test, as India would not leave any stone unturned to tighten their grip on the series after taking a crucial lead in the first Test. The game at Bengaluru will mark the 100th Test appearance for AB de Villiers in the format, as he will become the third South African cricketer after Jacques Kallis and Graeme Smith to achieve the feat. De Villiers would want to celebrate the occasion with yet another dazzling performance on this tour, and India will face a serious challenge to stop the South African run machine. READ: India vs South Africa 2015 2nd Test at Bengaluru: South Africa’s likely XI 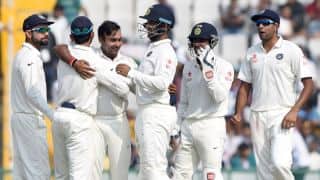 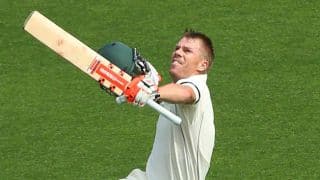