Dale Steyn absence has seriously hurt South Africans as he was the most experienced bowler for them.

South Africa premium fast bowler Dale Steyn has been ruled out of the fourth and final Test at Delhi. Dale Steyn who had earlier missed two Tests in the series, 2nd Test at Chennai and 3rd Test at Nagpur due to groin strain. South Africa now have a lot of issues in the bowling department after Dale Steyn was ruled out from the Kotla Test. Steyn has missed the last two Tests due to injury and the Proteas will hoped that their frontline bowler would be available for selection for the final Test. Marchant de Lange was called as cover for Steyn in the previous Test, but South Africa decided to go in with two spinners and two fast bowlers.  SCORECARD: India vs South Africa 2015, 4th Test at Delhi

Earlier, when South African team came into Feroz Shah Kotla ground on Tuesday, all eyes were on Dale Steyn but the pace spearhead missed the net session, indicating that he is yet to recovere from the groin injury which he had sustained during the first Test against India in Mohali. Kyle Abbott and Steyn’s cover Merchant De Lange had an extended session at the nets ahead of the fourth and final Test. Steyn, was mostly seated and did take any part in training as well. In fact, he did not even wear the bowling spikes and was seen walking around in normal training shoes. It was learnt that he has undergone one round of fitness test on Tuesday but the result was not known. ALSO READ: Virat Kohli calls on Indian team to be ruthless on South Africa in 4th Test at Delhi

India take on South Africa in the fourth and final Test in the Gandhi-Mandela Series 2015 at Delhi’s Feroz Shah Kotla. India have already sealed the series after their comprehensive win in the Nagpur Test. India won the first Test at Mohali by 108 runs but drew the second Test at Bengaluru as rains washed 4 out of the 5 days. India will be looking to win with a 3-0 scoreline, whereas South Africa will look to salvage some pride by winning the last match of their tour. 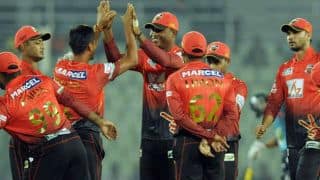 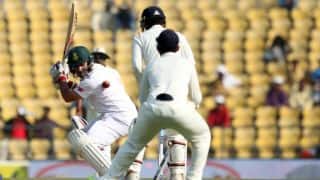