India have already sealed the series and will look to make it 3-0 at Delhi.

South Africa will have one last chance to redeem themselves when they take on India in the fourth and final Test in the Gandhi-Mandela series 2015. India have already won the series 2-0 after comprehensive wins at Mohali and Nagpur. India will leave no stone upturned to make it 3-0. Virat Kohli has now won back-to-back series as captain and his first at home. India won a series in Sri Lanka for the first time since 1993 under Kohli’s captaincy, which was his first win as permanent skipper. South Africa will look to go all guns blazing and register a win before they leave the country after a long 72-day tour. Live Cricket Scorecard: India vs South Africa 2015, 4th Test at Delhi

South Africa skipper Hashim Amla had earlier ruled fast bowler Dale Steyn out of the playing XI for the Delhi Test as he is yet to recover from a groin injury. Although Marchant de Lange was called as back-up for Steyn, he did not play n the previous Test. With Kyle Abbott in the squad, it is unlikely that he will get a place in this Test unless South Africa decide to go in with 3 pacers with Kagiso Rabada dropped to the bench. India vs South Africa 2015, 4th Test at Delhi: Preview

India will not look to make many changes in their team. The three-spinner strategy has worked tremendously well so far. But they might juggle with their batting line-up a bit. A good option will be to rope in Gurkeerat Singh or Stuart Binny in place of Ajinkya Rahane, who has under performed in this series so far. 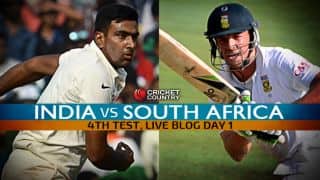