South Africa were bowled out for 121 on Day 2, with Ravindra Jadeja taking five wickets for 30 runs.

India and South Africa face off on the third day of the ongoing fourth and final Test in Delhi on Saturday, with India in the driver’s seat after gaining a 213-run lead on the second day. South Africa were once again done in by quality spin on a turning track, with Ravindra Jadeja picking five wickets for 30 runs in 12 overs while Ravichandran Ashwin grabbed a couple of wickets for 26 runs. For the visitors, AB de Villiers was the only redeeming factor, putting up a brave display with the bat by scoring 42 off 78 balls, including five boundaries. While the South African One-Day International (ODI) skipper missed out on his 39th Test fifty by eight runs, only one other batsman (Temba Bavuma, 22 off 55 balls) managed to cross the 20-run mark while a total of four South African batsmen scored in double-digits. LIVE CRICKET SCORECARD: India vs South Africa 2015, 4th Test at Delhi

On Day One, India had won the toss and elected to bat first. Kohli has now won the toss and all four matches in this series. India went in for a fast bowler in place of spinner as Umesh Yadav came into the side ahead of Amit Mishra. For South Africa, Piedt made the cur ahead of Simon Harmer, Abbott instead of Kagiso Rabada and Temba Bavuma made the cut in place of Stiaan Van Zyl. LIVE CRICKET UPDATES: India vs South Africa 2015, 4th Test at Delhi, Day 3 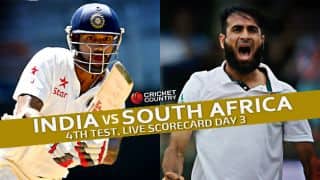 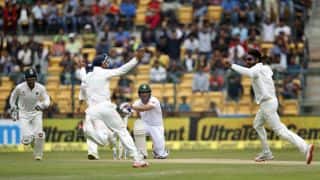