Ravichandran Ashwin claimed two key wickets including skipper Faf du Plessis as India closed in on a series win after making South Africa follow-on in the second Test on Sunday. The tourists were 74 for four at lunch on day four, still trailing India by 252 runs in Pune. Temba Bavuma, on two, and Quinton de Kock, on one, were batting at the break.

Ashwin got du Plessis, who promoted himself to number four in the batting order, caught behind for five with wicketkeeper Wriddhiman Saha holding on to a juggling catch.

The off-spinner soon got opening batsman Dean Elgar caught out for 48 as South Africa slipped further.

Paceman Ishant Sharma struck on the second ball of the day to trap Aiden Markram lbw for nought after the tourists started their second innings with a trail of 326.

Umesh Yadav got Theunis de Bruyn caught behind for eight after the batsman tried to flick a sliding delivery down the leg side only to be caught by a diving Saha.

The Proteas were dismissed for 275 at the end of day three in response to India’s 601-5 declared, 127 short of the follow-on.

South Africa put up some resistance in their first innings with Keshav Maharaj, who made 72, and Vernon Philander, 44 not out, putting on 109 runs for the ninth wicket to frustrate the Indian bowlers.

Ashwin broke the stand with Maharaj’s wicket and then got the last man Kagiso Rabada to return figures of 4-69.

A victory for India, already one-up in the three Tests, will see them beat the record of 10-straight home-series wins they share with Australia. 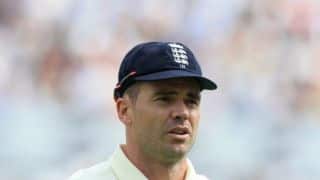