The first Test against South Africa, staring October 2 in Visakhapatnam, will be Agarwal's first on home soil.

After going through the rigours of Test cricket in Australia and West Indies, India opener Mayank Agarwal is eyeing the home series against South Africa.

The first Test of the three-match series against the Proteas, staring October 2 in Visakhapatnam, will be Agarwal’s first on home soil, and having experienced the high of the Border-Gavaskar Trophy last year, followed by relatively quiet outings in the Caribbean one half-century from four innings Agarwal is keen to implement the takeaways of the two tours against South Africa.

“Playing at home is always special and I’m really looking forward to the series. There was a lot I learnt in Australia, there was even more learning in the West Indies. I’m working on what I’ve learnt and I’m eager to go out and put those lessons to use against South Africa and have a good series at home,” Agarwal told Times of India.

“It was a learning curve about personal expectations, different conditions and situations we came across. We played with the Dukes ball, the conditions were hot and it was a great experience to face Kemar Roach, who bowled really well in the series.”

India, the No. 1-ranked Test side in the world, are currently leading the World Test Championships rankings with 120 points. Agarwal, who has represented India in four Tests since his international debut in December last year, credited confidence and intensity as key behind their success.

“As a unit, the Indian team is playing at a very intense level. It is really amazing to see the intensity with which we play,” he said. We are going out there not only to win matches but win situations, win each session. We understand that individual performances can go through highs and lows, but it is important to keep up the intensity with which we are playing. Also, we are a very confident unit. We believe in ourselves and are backing ourselves to play the best cricket we can.”

It may still be early days for Agarwal but the opener concedes to have learnt plenty. In Australia, he faced the new ball against the likes of Pat Cummins and Mitchell Starc and came out on top, providing India strong starts in Melbourne and Sydney. Subsequently, in West Indies, Agarwal found the going tough in his first three outings before rediscovering his touch and scoring 55 in Kingston.

That said, each outing has been a lesson in itself for the 28-year-old opener from Karnataka.

“It has been an amazing journey. A lot of fun and different experiences. I’m getting a taste of what international cricket is all about,” Agarwal said. 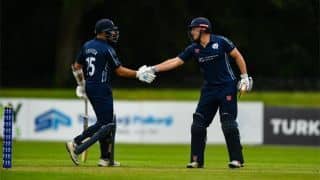