Shikhar Dhawan has said that Indian players practice facing high-pace bowling in the nets which is why they can counter it easily.

India opener Shikhar Dhawan is happy with the way he batted in the second T20I against South Africa in Mohali on Wednesday, a contest the hosts went on to win by seven wickets.

Dhawan, whose stint at the ICC World Cup 2019 was cut short due to injury, returned to international cricket on West Indies tour but failed to cross 36 across five innings. However, he gained some confidence while turning out for India A against South Africa A in an unofficial ODI series where he registered consecutive half-centuries.

On Wednesday, in chase of 150, he scored a solid 40 off 31 with four fours and a six before a moment of brilliance in the field put an end to his show. “It was a good start for all of us,” Dhawan said after India successfully chased down the target to take an unassailable 1-0 lead in the three-match series. I was playing well, timing the ball well and enjoying myself. Great to get a winning start to the home season.”

The 33-year-old said consistent practice against fast bowlers in the nets has made Indian batsmen accustomed to countering pace at international stage. “We guys practice a lot at that (late 140kps) pace in the nets, so we are used to it now and that’s why we can counter that pace in matches,” Dhawan explained.

Dhawan’s innings ended when a freak one-handed catch in the deep from David Miller that left him smiling. It was an unbelievable catch and Virat (Kohli) was thinking that as well. I was smiling and appreciated his effort. It was hit hard, it wasn’t lofted, it was hit flat and I took it in my stride,” he said.

The third and final T20I of the series will be played on Sunday in Bengaluru. 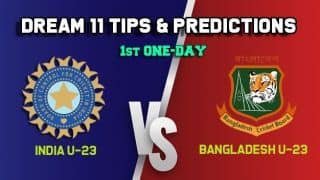