Rohit Sharma is special talent, will do well in Tests: Ajinkya Rahane

Rohit Sharma is special talent, will do well in Tests: Ajinkya Rahane

The Indian Test vice-captain also said that he wants to return to ODI cricket. One of India’s batting mainstay when it comes to the longer format of the game – Ajinkya Rahane exudes class and elegance when on song irrespective of the format he is playing in.

After a good outing against West Indies, Rahane is eyeing to continue his batting form in the upcoming home season which begins with a three-Test series against South Africa on October 2. Ahead of the first Test, Team India deputy in Tests backed “special talent” Rohit Sharma to deliver the goods in the new role of an opener during home series versus Proteas.

Rahane further added that he finds it hard to believe that a special talent like Rohit is sitting out of India XI for the Tests. During the West Indies series, Rahane and Hanuma Vihari cemented the two available slots in the middle-order, prompting the team management to try out Rohit as an opener in the upcoming South Africa Tests.

Rahane was asked to give his opinion on Rohit’s new role and the ever non-controversial right-hander didn’t give a direct reply. “You want an answer actually? I don’t know yet whether Rohit will open the innings. If he does, I will be happy for him. I said in West Indies also, it is hard to see a special talent like Rohit sitting out,” Rahane said at a promotional event on Thursday.

Rohit has three hundreds in 27 Tests and an average of a shade under 40. Many believe that Rohit’s audacious strokeplay has brought about his downfall, but Rahane thinks otherwise. “He has worked so hard and if he gets an opportunity, I am sure, he will do well,” Rahane added further.

JUST IN: Umesh Yadav replaces Jasprit Bumrah in India’s Test squad#TeamIndia fast bowler Jasprit Bumrah has sustained a minor stress fracture in his lower back and has been ruled out of the upcoming Paytm Freedom Series for Gandhi-Mandela Trophy against South Africa. pic.twitter.com/yZiUmMABPt

“We all know the quality he has — special talent. Test cricket is all about mindset and ODI cricket, you can just go out there and back yourself. In Test cricket, sometimes if two bowlers are bowling good spells, you need to respect that and come out strong and play your game after that,” he said.

For the 31-year-old, one of the bigger challenges is to get more matches when someone is just playing one international format, which is Test cricket in his case. “The only challenge you have is getting match practice. Sometimes, match practice is really important and facing quality bowlers is important. At the highest level, you face quality bowlers all the time. All of them are equally good. You don’t get loose balls easily.

“You need to practice really hard. Your practice sessions should be really hard so that when you step into play a match, it gets easy for you. Preparation and process is the key.

Having last played an ODI 18 months ago, Rahane wants to have another shot at the 50-over format. “Apart from Tests, I really enjoy playing ODI cricket as well. I want to comeback to ODIs. Right now, the focus is completely on this series. After the Australia series, there was a long break. When I got to know that I was not part of the World Cup squad, my plan was to play county cricket and luckily the Hampshire people called me and asked about the county cricket.”

Time at English county Hampshire was well spent, said Rahane. County cricket provided him with a lot of soul searching and he fell in love with the sport all over again.

“I thought I can actually use my time really well and learn about cricket and life. It’s a completely different experience when you play county cricket. Here, we get things so easily. In county cricket, you need to do everything on your own,” recalled Rahane.

“Apart from cricket, small things helped me a lot. I used to walk alone after the practice session and think what was my thinking when I started playing cricket. The answer was that I enjoyed cricket rather than focusing on the outcome. When you think about focus and outcome, you put yourself under pressure.

While India will be favourites against South Africa, Rahane said that the likes of Kagiso Rabada and Keshav Maharaj need to be respected.

“Rabada is a quality bowler. He is a wicket-taker. It doesn’t matter how the wicket will be. We have to respect him and the other bowlers. They have got a relatively young team, but their bowling attack — fast bowlers and spinners are experienced. Keshav Maharaj has played county cricket and did well in red ball. You need to respect them,” he signed off. 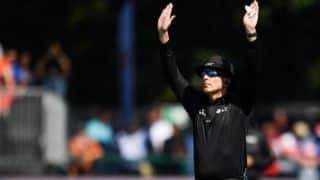 There will be lot of pressure on us: Alyssa Healy on T20 WC